Keigo Manaka
[view]
“Just remember Bord's the handsome one! Then you can't go wrong. Simple! So yeah, don't get us mixed up again.”
—Bord to Kris in New Mystery of the Emblem.

Bord is a playable character from the Archanea Series of Fire Emblem. Bord is, alongside Barst and Cord, a member of the Talysian mercenary group that is spearheaded by Ogma.

Bord makes his first appearance in Chapter 2 of Shadow Dragon and the Blade of Light, where he, alongside Ogma, Barst and Cord, enlists in Marth's army under the behest of Princess Caeda of Talys. Bord then aids Marth in bringing the War of Shadows to an end, and thereafter reverted to his previous occupation as a woodcutter.

According to his ending, Bord does not appear at all in the original Book 2. Owing to the fact that he returned to his peaceful life in Talys as his previous occupation as a woodcutter, it could be said that he did not wish to take part in the War of Heroes and continued to live in peace, or that he was not notified due to Caeda moving to Altea to become Marth's fiancee, and lost connections with her.

Bord returns in Chapter 3 of New Mystery of the Emblem, where he has taken up temporary residence in a Macedonian village. When Marth pays a visit to the village, Bord appears to greet him, promptly enlisting in his army thereafter. Bord will then aid Marth in ending the War of Heroes, before returning to Talys to resume his occupation as a woodcutter.

Bord and Cord appear together in the third and final of Kiria Kurono's side stories. In this game, they exist as Mirage golems that Tharja creates as a means for training Kiria on being cute. However, they malfunction and rage out of control. The battle against the Bord and Cord carries specific conditions; Kiria and Tsubasa are required to be in the active party, and it is the only battle in which both characters have access to the special charm-inflicting skill "Seducing Pose." The attack hits both Bord and Cord, but Bord can only be charmed by Tsubasa, and Cord can only be charmed by Kiria. Bord and Cord are only vulnerable to damage when in the the Charmed state.

Like a majority of the cast in Shadow Dragon and the Blade of Light and Mystery of the Emblem, Bord's personality is not very well developed, owing to the minor role that he plays in the games. Nevertheless, it is still possible to deduce certain traits that define his character from the few interactions that he engages in. Of note is the fact that Bord's personality is exactly the same as that of Cord's, one that is proven by their speech mirroring each other both when speaking to Barst in Chapter 5 of New Mystery of the Emblem and in their respective base conversations with Kris.

As a character who is deliberately designed as the counterpart of Cord, it comes as no surprise that a rivalry exists between Bord and Cord, where they constantly attempt to outdo each other in a variety of areas. This rivalry of theirs is one that has the tendency to become rather heated as the pair lose their cool while in the midst of arguing with each other, a fact that is proven through their base conversations in New Mystery of the Emblem, where they wind up engaging in a violent tree-felling competition. Their rivalry also extends to the looks department, where Bord, through his base conversations with Kris, narcissistically proclaims that he is the more handsome of the two.

In spite of his apparent hatred of Cord, it is quite evident that Bord, in actuality, cares for him tremendously; through his base conversations with Kris, he repeatedly expresses his anxiety for Cord's safety under the guise of insults that suggest that his partner is useless without his assistance.

Bord has one thing going for him that sets him apart from his fellow Fighters: a base Axe rank of C. This allows Bord to use the Hammer, and by extension, allows him to forge it and wield it against Knights to kill them in a single blow. It also gives him weapon triangle, helping his durability on higher difficulties.

However, Bord's main weak point is his Speed: with a 10% growth in his base class and a 0% personal growth, Bord will likely never double anything faster than a Knight, and on higher difficulties, it is very likely he will fear being doubled himself before long. Additionally, Barst boasts a base D-rank, which means he can also wield the Hammer before long if trained: due to his higher stats, he will be universally preferable to Bord once he can wield the Hammer. Bord's lead in axe rank matters little, aside from enabling Silver Axe use; the Brave Axe is limited to the online shop, and he is unlikely to obtain an A-rank in time to use Hauteclaire. This makes Bord's utility mostly limited to the early game - that said, if used longterm, the sheer power of a forged effective weapon combined with his relatively good Strength may allow Bord to pick off kills without needing to double. If raised to promotion, Bord's preferred class is Hero, as it gives him a significant Speed boost and he should have his axe rank capped by that point.

Talys Brave
In the Kingdom of Talys, he lived peacefully as a woodcutter.

The Lopper
Bord returned to his peaceful life as a woodcutter. In time, he became renowned for his craftsmanship.

The Lopper
Bord returned to the kingdom of Talys and became a woodcutter. He kept training, boasting that he could fight anywhere, anytime.

Bord is illustrated in the trading card game Fire Emblem Cipher with the following card: 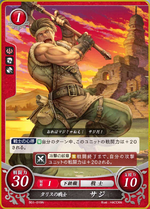 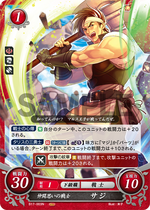