Member of the Ostian Armor Knights

Knight
[view]
“...I am a knight, and my loyalty lies with you. I shall always be at your side, ready to serve.”
—Bors in a support conversation with Lilina in The Binding Blade.

Bors is a playable character in Fire Emblem: The Binding Blade. He is a rather easygoing knight of Ostia, who was assigned to Roy's party when the war started, as commanded by Lilina. He is Gwendolyn's overprotective older brother and was also the boss during the tutorial, helping Roy together with Cecilia and other Ostian soldiers with his training.

He makes a brief cameo appearance in chapters 16 and 17 of the Hasha no Tsurugi manga.

Bors, along with his younger sister, Gwendolyn, are part of the Ostian Armor Knights, a notably strong sector of Ostia's military. Around the time he was knighted, he met and befriended Barthe, another member of the Ostian Armor Knights. He also became acquainted with Astolfo, an Ostian spy. At one point, he competed in a martial arts tournament against his will where he battled and defeated Barthe, though little else is known about this competition. During his time as a knight, he apparently gained the trust of the Ostian Marquess, Hector, as he made Bors responsible for the safety of his daughter, Lilina.

When King Zephiel of Bern set his sights on Lycia as the next target of his conquest, Marquess Eliwood of Pherae wrote to his son, Roy, who was studying in Ostia, telling him to return home. Bors, along with Alen, Wolt, and Marcus, accompanied Roy back to Pherae. From there, he fought under Roy's leadership on a journey to thwart King Zephiel's goal of human eradication, witnessing the death of Hector and reuniting with Gwendolyn, Barthe, and Lilina amidst an Ostian revolution.

After the war ended, Bors returned to Ostia, helping to rebuild the war-ravaged country. He also strove to bring harmony back to the people of Ostia, who had been divided by the revolution.

Bors is described as having a "kind-hearted nature", something that can be clearly seen in his interactions with other members of Roy's army. In his support with Astolfo, Bors tries to comfort the saddened spy, with the latter believing he was indirectly responsible for the death of Hector. He plays a similar role in his support with Lilina, where he tries to allay the young girl's worries over Roy's sudden shift in attitude. His support with Barthe also follows a similar structure, with Bors assuring his fellow knight that it wasn't his fault that Lilina was captured during the rebellion. Also, in his support with Ogier, he expresses that there must always be a reason for violence, showing a pacifistic side of his already incredibly kind personality.

Bors is also shown playing a paternal role in many of his interactions. In his support with Gwendolyn, he attempts to covertly monitor his younger sister out of fear she might be injured during battle. In his support with Lilina, he asks the girl if anything has been bothering her lately. She becomes angered with his attempts to console her and storms off. A day or so later, she apologizes for her rude behavior and tells Bors the reason she has been so "touchy", with the knight helping her to realize Roy is still the same person as before. Finally, in his support with Ogier, he passes on some wise words to the young mercenary about motivations behind fighting, helping Ogier come to terms with the fact that he has a good reason to participate in battle.

Bors is a difficult unit to use compared to Alen, Lance, and even Wolt. His Strength and Skill are slightly below average, but they're by no means terrible. His Resistance is terrible, and will remain so for the duration of the game. Unfortunately, while his Speed growth is reasonable, his Speed base is abysmal, and many early-game enemies can double him, effectively cancelling out his durability. As an Armor Knight, he will face many difficulties throughout the game, particularly on Hard Mode, where axe-using enemies can take him apart fairly easily early on and he faces bad hit rates. Bors also has terrible mobility, and will lag behind regularly if carried, particularly after his promotion (where carrying him becomes almost impossible), and he competes for the Knight Crest with all the game's cavalry. Though he is a Triangle Attack user, utilizing it is very difficult as all three armors are slow and difficult to raise. In general, while Bors is not useless, he tends to provide little that cannot be done by others.

Bors - Impregnable Knight (鉄壁の重騎士 Teppeki no jū kishi)
"Bors returned to Ostia to help rebuild his ravaged country. His kind-hearted nature allowed him to unite the divided people once again to bring back harmony and prosperity to Ostia."

Bors is illustrated in the trading card game Fire Emblem Cipher with the following cards: 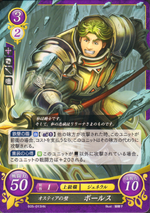 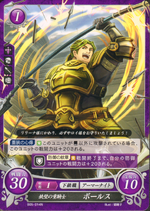 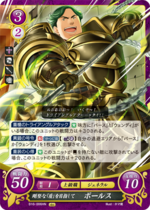 Sir Bors is a character in Arthurian legend that appears later in the tradition. He is Lancelot's cousin, nephew to Lancelot's father Ban of Benwick and, according to Sir Thomas Malory's "La Mort d'Arthur," one of the three knights who succeed in finding the Holy Grail. The other two, Percival and Galahad, are virgins, but Malory states that Bors had relations once and has a son, Elian le Blank (XVI.VI); many of Bors' temptations before the companions unite and find the Grail have to do with avoiding temptation. When they find the Holy Grail, Galahad dies and is borne into heaven, and Percival becomes a hermit in the Holy Land and dies a year later; at that time, the Grail disappears from the earth and Bors returns to England, where he stood with Lancelot's faction during the civil war between Lancelot and Gawaine that began over the former's affair with Guinevere and Gareth's subsequent death, and which ultimately resulted in the destruction of Arthur's kingdom.