Mug
[view]
Boss (or Chief とうもく) is a class featured in TearRing Saga: Utna Heroes Saga and TearRing Saga: Berwick Saga. Bosses are leaders of bandit or pirate groups who wield swords in combat. The Boss class combines the traits of the Brigand and Thief classes. Bosses have average stat caps, with the exception of a higher then usual strength cap.

In Berwick Saga, Boss is a class used only by named enemies, and the majority have bounties placed on them. Additionally, there is also a class called Rogue (悪党 akutō, Scoundrel in the fan-translation) that is virtually identical to Boss class, only wearing blue clothes instead of a red clothes in its sprites.

In Vestaria Saga I, the Boss is known as the Chief Thief. It wields Swords and Axes, but all Chief Thieves only use Axes. It's stats are similar to the Ruffian's, only higher. The class becomes playable in Vestaria Saga: The Holy Sword of Silvanister, losing it's ability to wield Swords.

Battle model of Maerhen as a Boss in TearRing Saga. 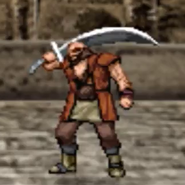 Battle model of Shamos, a Chief in Berwick Saga