The Bowgun (ボウガン Bougan) is a Bow that appears rather infrequently in the Fire Emblem Series. In both Fire Emblem: Shadow Dragon and the Blade of Light and TearRing Saga: Utna Heroes Saga, the Bowgun is superior to the Iron Bow but inferior to the Steel Bow in terms of Might. The Shadow Dragon and the Blade of Light iteration of this bow is also characterized by a Critical rate that surpasses that of the Iron Bow.

In Fire Emblem: Radiant Dawn, the Bowgun is the weakest of the five Crossbow weapons that are obtainable in the game. This bow permits its wielder to perform close-range attacks in addition to the standard ranged attacks that are an inherent characteristic of bows. While the Bowgun's Might is high, Strength does not play a role in determining damage output making it less powerful than it appears. Supports that increase attack power will still work however, as these target the Attack Power of the wielder instead of the weapon's Might or Strength. Like its other Crossbow counterparts, the Bowgun's Hit Rate is very high at 100%, although this is offset by its inability to award weapon exp. 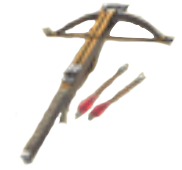