Member of the Greil Mercenaries

Prologue: Mercenaries [playable in The Battle Begins] (Path of Radiance)

[view]
“Aw, that's a bunch of hooey! Survival on a battlefield depends on experience and luck. Nothing more! If you dive into battle with a conceited attitude, you'll end up dead no matter what blood is in your veins!”
—Boyd to Mist in a support conversation

Boyd is a playable character from Fire Emblem: Path of Radiance and Fire Emblem: Radiant Dawn. He is the middle child of his family, and joined the Greil Mercenaries in order to support his younger half brother Rolf and fight alongside his older brother Oscar. He is friendly rivals with Ike, initially doubting him as the leader of the Greil Mercenaries, but eventually coming to terms with him. Boyd is supervised occasionally by his Deputy Commander, Titania.

Boyd is first introduced into this game in the Prologue, where he is tasked to check on Mist, who has apparently taken quite a while to get Greil to return to the mercenaries' fort. Upon catching up with Greil, he is then ordered to stand in as Ike's sparring partner. When Boyd is eventually defeated, he claims that he "wasn't really giving it [his] all", to which Mist asserts is a lie.

Alongside Oscar and Titania, Boyd is assigned to assist Ike in his first job as a mercenary in Chapter 1, where they are tasked to take out a group of bandits in a nearby village. At the end of the battle, Boyd dismissively passes off Ike's successes as "not being as flashy as [his] first time", whereupon Oscar reveals that he had gotten "so keyed up [he] broke his axe".

When Rhys later receives news of Rolf and Mist being captured by bandits in Rescue, Ike rashly dashes out of the fort in search of them, with Boyd, Oscar and Rhys hot on his heels.

At the start of the next chapter, Greil will then make the decision to punish Ike alone, to which Boyd, Oscar and Rhys jump in to assume responsibility, with Boyd exclaiming that it is not fair of Ike to "[play] the martyr". Greil then decides to punish Ike by separating him from Boyd, Oscar, and Rhys, sending him on a mission with Titania, Shinon and Gatrie instead.

Boyd returns in Chapter 5, where the mercenaries are faced with the dilemma of whether or not they should protect Princess Elincia from the invading Daein forces. When cued for his opinion, Boyd immediately responds by agreeing, asserting that this is "what heroes are supposed to do". After the end of the preceding battle, Boyd will assist the mercenaries in packing up to leave the fort for the safer confines of Gallia.

After Greil's death at the hands of the Black Knight in Chapter 7, Boyd and Oscar attempt to stop Gatrie and Shinon from leaving the mercenaries to no avail. He then readily accepts Ike as the new leader of the Greil Mercenaries, agreeing to support him all the way. In a Base Conversation Boyd shares with Ike later in the chapter, he reveals that he is indebted to Greil for having taken himself and his brothers in during their time of greatest need, or as he puts it, for "[giving] [them] [their] lives back". He then asserts that he is staying with Ike not out of obligation, but purely out of the need for him to "protect [his] family" from harm.

At the start of Chapter 9's battle, Mist and Rolf take to the battlefield, determined to assist the battle in any way they can. Boyd, concerned for their safety, attempts to urge them to get off the battlefield by rudely insulting their lack of battle skills. As his show of concern escalates to a bicker, Ike cuts Boyd off by allowing Mist and Rolf to join the mercenaries in battle, much to Boyd's immense exasperation.

Later in Chapter 13, Boyd will engage in a discussion with his brothers, where he expresses a desire to be able to perform an "unstoppable attack" with his brothers. This wish of his is granted in Chapter 19, where Oscar reveals the results of his research, whereupon Boyd impatiently tells him to summarize his findings. As Ike accidentally walks in on them later, they break off their discussion, not without Boyd proudly informing him that they have planned a "surprise".

Boyd will then remain with Ike's forces until the Mad King Ashnard is finally defeated, thereafter continuing his life as a member of the Greil Mercenaries.

In the three years since the Mad King’s War, he managed to significantly build up his physique alongside Ike. It got to the point where his clothes would often tear from being too tight, which Mist would then have to patch up for him. Boyd returns in this game at the end of Chapter 2-F, where he participates in the plan to rescue Lucia from Ludveck's rebel forces.

In Chapter 3-1, Boyd can reunite with Rolf's biological mother when he visits a particular house in this chapter. Upon recognizing him, she will comment on how he resembles his father, to which he responds by feigning ignorance before leaving in a hurry.

Rolf's mother will then trespass into the encampment of the Laguz Alliance in the preceding chapter, and is saved from being captured by Oscar and Boyd. Boyd promptly gets into a heated confrontation with her, revealing the fact that she had abandoned her entire family, including her own son, in order to elope with an external lover. He even tells her that his father passed away sometime after she left and that he and Rolf would have died as well if Oscar did not leave the Crimean Royal Knights. While this is happening, Oscar tells them that he will attempt to get Rolf to meet her, much to Boyd's chagrin. Rolf will refuse to do so almost immediately, asserting that the only true family that he has is that of the Greil Mercenaries. As Oscar proceeds to get her to leave the encampment, Boyd, touched by Rolf's loyalty, goes on to assert that he is not a "thing" "to [be given] away to a crazy woman".

If Boyd shares an A-rank support with Mist, he will re-appear after 80 kills in Chapter 3-F have been achieved, where he alerts Ike to the fact that Mist has fainted. He then clears a path for Ike to carry her to safe confines, reminding her to "hang in there" for his sake.

Boyd is later spared when Ashera casts her judgment upon the continent of Tellius. He may subsequently be brought into the Tower of Guidance to reverse her judgment.

If Boyd shares an A-rank support with Mist, he will eventually marry her, and is described to be chagrined when she cries during their wedding vows.

While Oscar is calm, polite, and intelligent, Boyd is the opposite, and tends to be more reckless, brash, and a little dense. This has often led him to be the butt of jokes cracked by his brothers and Mist. Despite this impetuous nature, Boyd is consistently shown to possess a kind heart and a strong sense of justice, as shown in Chapter 5 where he is for protecting Elincia from Daein. Boyd is nonetheless portrayed as an individual who cares little about the tactics or gambles in a battle, and often fights without worrying about the details. He does question his role as a mercenary at times, as can be observed in his Support conversations with Brom.

In the events of Radiant Dawn, Boyd appears to have matured, and is no longer the simple-minded fool he was in Path of Radiance. More so, his sense of morality and kindness is much more prevalent, almost forbidding Mist from entering the battlefield due to her wooziness in Chapter 3-F. This large change in his personality may be observed in the mannerisms he exhibits throughout the course of the game, where he is portrayed to display tact before speaking his mind. Boyd's transformation is not entirely complete, as he persists on constantly bickering with his brothers.

* Only if Axe mastery level is at D or lower.

Due to his good growths and immediate availability, Boyd can prove to be a very useful unit. His base stats can be somewhat problematic, however. He gets weighed down to 3 AS by iron axes, which it makes it difficult for him to double, and in fact results in him being doubled by certain enemy types early on. After the first few chapters, however, he will outgrow these problems. On average, by level 5 he has the 6 AS he was promised at base, and by level 7 he'll no longer be weighed down by iron axes at all. It's also worth considering using the early speedwings on him to get him started faster, though other units arguably make better use of them (most notably Kieran). As he continues to gain levels through the mid game, his high offensive growths begin to shine through. Overall, he's in the running for being one of the best foot units in the game. His default skill, Tempest, grants him extra Hit and Avoid, but may prove to be a hindrance if his biorhythm is low. It may be more reliable to take the skill off of him entirely, but it can be fun and have niche usefulness to keep it on him. He also boasts solid supports, especially that of the Bond Supports he shares with his brothers.

It's worth noting that Boyd can perform a triangle attack with his brother in this game. It can be extremely potent, as it grants an automatic hit and crit to the person who performs it, but it comes with some issues. Rolf is a difficult unit to train in general, and it can be hard to justify using him just for this niche. Oscar is certainly worth using, but the fact that you need to choose bows as his secondary weapon type is somewhat of a problem. Due to both steel axes and hand axes being E rank, allowing them both to be used immediately upon promotion, axes is generally considered the better weapon type. Bows can be acceptable on him, however.

With some proper training, Boyd can once again prove to be a useful asset on the battlefield. His HP and Strength are exceptional as expected of the Warrior norm, and his Defense is surprisingly good too, with a decent growth of 50%. Should he be RNG screwed, however, his Defense may not grow too well, but it should cap as a Reaver, as its cap of 30 is mediocre. His Speed and Skill are decent, but lower than that of Nolan. The same is even more so for Luck and Resistance. Boyd has a lot of availability and can deal heavy damage against a myriad of units. Boyd's speed and skill stats have decent bases, but their growths are inconsistent. Their caps as a Reaver are also quite high, at 36 each. He can reach these caps, but it will take effort and luck. Boyd can be a powerful wielder of Urvan, due to his very high strength and decent Defense, Speed, and Skill. It also raises his awful Resistance.

'Great job, Ike! Of course, if I hadn't been by your side the whole time, victory might have slipped away...'

Boyd trained day in and day out, so as not to lose his spot to "some stupid rookie". He never did, either.

Boyd trained daily, so as not to lose his spot to "some stupid rookie". Mist humored her husband's insecurities.

Boyd is illustrated in the trading card game Fire Emblem Cipher with the following cards: 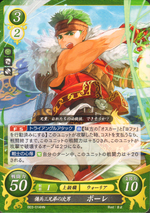 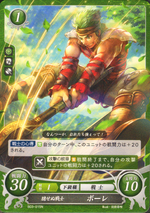 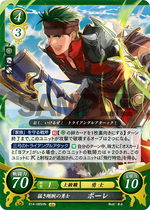 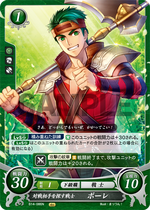 Boyd is a Scottish surname which may have been derived from the name of the island of Bute.

Bole is the section of the trunk of a tree beneath the point where branching commences in botany, fitting to his class due to the history of fighters being woodcutters in the series.