Varies
[view]
“An axe with which the wielder always strikes twice.”
—In-game description, New Mystery of the Emblem.

Brave Axe (勇者の斧 Yūsha no ono) is an Axe that appears across the Fire Emblem Series. An axe that belongs to the Brave series of weapons, the Brave Axe allows its wielder to double the number of attacks that they can normally perform. In earlier titles, this axe is very useful due to its high Durability, a fact that is offset by its high Cost. The Durability of the Brave Axe is greatly reduced in its GBA iterations, and alongside its increased Weight, it is less effective as a result. In more recent releases, the Brave Axe's stats have received a substantial boost, striking a balance between Accuracy, Weight and Cost.

Amongst the Brave class of weapons, the Brave Axe is considered to be the strongest.

In all of it's appearances, the only one that does not feature the distinctive double attack ability is the spin-off title Fire Emblem Warriors, due to a lack of turn-based mechanics in that game.

Concept artwork of the Brave Axe in Path of Radiance.

Concept artwork of the Brave Axe from Awakening.

The Brave Axe, as it appears in first series of the TCG.

Haar wielding the Brave Axe in Path of Radiance. 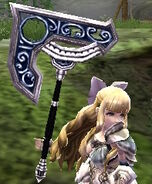