The Brave Bow (勇者の弓 Yūsha no Yumi in the Japanese version) is a Bow that recurrently appears across the Fire Emblem series. A weapon of the "Brave" series, this bow permits its wielder to double the number of attacks that they are normally able to perform. This can prove to be exceedingly advantageous to the player, as the unit in question can perform up to a maximum of four strikes, should their Speed points supersede that of the enemy target. The only offside to the Brave Bow is that of its low Durability, a fact that will cause it to break and be rendered obsolete rather easily.

In Fates, the Brave Bow is known as the Crescent Bow (強者の弓 Kyōsha no Yumi, lit. Strong Bow) in localised versions of the game.

*Adean must be lovers with either character for the conversation involved to be made available.
**Only if the bow is not acquired in the First Generation.

The Hero Bow, as it appears in the first series of the TCG. 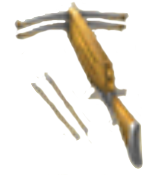 Concept artwork of the Brave Bow from Path of Radiance.

Rolf wielding the Brave Bow in Path of Radiance. 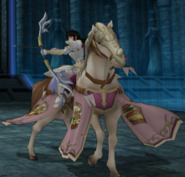 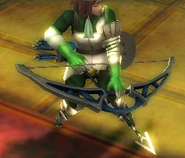 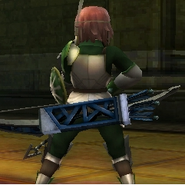 The quiver of the Brave Bow attached to Noire's back in Awakening. 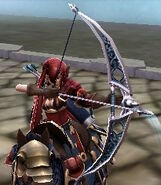