Brave Lance (勇者の槍 Yūsha no Yari, mates. Brave Spear in the Japanese version) is a Lance that recurrently appears across the Fire Emblem Series. The lance variant of the Brave series, this lance is one that permits its wielder to perform two consecutive attacks regardless of Speed differences between them and the selected enemy target. Should the wielder in question maintain a minimum of four points of Speed over their target, equipping the Brave Lance will allow them to administer a total of four strikes. The special ability of this lance is, however, limited by its low Durability, a fact that will cause it to break rather easily if subjected to heavy use. Coupled with the general scarcity of the Brave Lance across the series, it is thus highly advisable for it to only be used sparingly.

In the Jugdral Series of Fire Emblem, the Brave Lance is the personal weapon of Finn, conferred to his possession by Prince Quan of Leonster in recognition of his service to his liege. This is further emphasized in Thracia 776, where the lance is bound solely to him, and in Awakening, where the Jugdral incarnation of the Brave Lance was used as the weapon model for the Finn's Lance.

Of all it's appearances, the only one in which it lacks it's distinctive ability is the spin-off title Fire Emblem Warriors, due to the lack of turn-based combat mechanics in that game.

Render of the Brave Lance from the TCG.

Concept artwork of the Brave Lance from Path of Radiance.

The Brave Lance, as it appears in the first series of the TCG.

An enemy General wielding the Brave Lance in Path of Radiance. 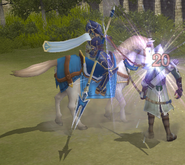 Geoffrey striking an enemy Sniper with the Brave Lance in Radiant Dawn.