Varies
[view]
“A sword with which the wielder always strikes twice.”
—In-game description from New Mystery of the Emblem

The Brave Sword (勇者の剣 Yūsha no Ken) is a special Sword that has appeared across several titles in the Fire Emblem Series. The sword version of the Brave series of weapons, the Brave Sword, like its counterparts, grants its wielder the unique ability to perform twice as many attacks as they are normally able to perform. This sword is usually found in the middle or end of any given title, and are thus notorious for being difficult to obtain.

Coupled with the Brave Sword's unique ability is the fact that it is a well-rounded weapon, characterized by substantial Might, supple Durability and a decent Accuracy rate. This allows the Brave Sword's wielder to gain a tactical edge, and is a good weapon for use against slower units like Knights and Generals. To this end, the Brave Sword is a favorable candidate to consider for forging purposes.

The only drawback to the Brave Sword is the fact that its Durability has the tendency to deplete rapidly, the result of the consecutive attacks that it induces its wielder to perform. Furthermore, the Brave Sword is relatively heavier when compared with most other swords.

The sword's only appearance in which it does not possess it's signature ability is the spin-off title Fire Emblem Warriors, due to the lack of turn-based combat mechanics in that title. Due to Silver Swords being Rank B weapons, Brave Swords are Rank A

This is possible because:

Concept artwork of the Brave Sword from Path of Radiance.

Concept artwork of the Brave Sword from Awakening.

The Hero Sword, as it appears in the first series of the TCG. 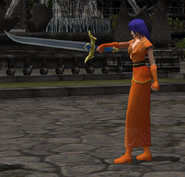 Mia wielding the Brave Sword in Path of Radiance.

In-game model of the Brave Sword from Heroes.
Add a photo to this gallery