[view]
The Brigand (さんぞく or 山賊 Sanzoku, also known as Bandit), is a combat physical class of common enemies in the Fire Emblem series and TearRing Saga: Utna Heroes Saga. Wielding Axes as their sole weapon of choice, Brigands are often encountered in the early stages of most games. Despite being present in a majority of the games within the series, Brigands rarely are a playable class.

While the class does not appear in Shadow Dragon and the Blade of Light, there are enemy Fighters that act as mountain bandits in the story.

In their original inception in Gaiden, Brigands act as an enemy-only class that is used by criminal characters. They are the first enemies encountered within the game.

Brigands return in Mystery of the Emblem with the same purpose as enemy axe users. Brigands reuse Fighter sprites, but have higher stats. Brigands are in the criminal class category, and thus are weak to the Ladyblade.

In Genealogy of the Holy War, Brigands remain an enemy only class, but gain a new purpose within the series. Brigands now operate on the sole purpose of plundering and looting Villages for personal benefit. Sending a unit to defeat them, and pay visits to Villages are necessary to ensuring that they do not succeed in their devious schemes.

In Thracia 776, Brigands are known as Mountain Thieves (マウンテンシーフ Maunten shīfu), serving much the same purpose as their predecessors. For the first time in the series, the class is made playable, taking the form of Marty, a subordinate of Dagdar. In this title, Mountain Thieves are able to promote into Warriors.

In TearRing Saga: Utna Heroes Saga, the Brigand class is enemy-only, and serves the same purpose as its non-playable predecessors.

In The Binding Blade, the Brigand class is yet again made playable, taking the form of Gonzalez. The class promotes into the Berserker class in this title. The class is thenceforth rendered an enemy-only class in the rest of its appearances in the series.

In Fire Emblem: Path of Radiance, Bandits promote into Berserkers, although none are playable without hacking. Their promotion gains are +3 in every stat except Magic and Resistance.

Bandits appear again in the direct sequel Radiant Dawn, but do not promote as the Berserker class is absent.

In Fire Emblem: Three Houses, the Brigand (ブリガンド Burigando) class is a potential class path for playable characters. A Commoner or Noble unit must be at least Lv. 10 and have an Axe Skill Level of C or Higher with an Intermediate Seal during the Certification Exam for this optional class.

Brigands are an enemy exclusive class in TearRing Saga: Berwick Saga. They are joined by Snow Brigands, and Barbarians (known as Sand Brigands). They often have thievery related skills.

In Vestaria Saga I, the Brigand is known as the Ruffian. It is an enemy-only class.

The main characteristics that brigands have are high HP and Strength, only offset by their low Skill and Defense (Fire Emblem: Thracia 776 is an exception where the only notable brigand, Marty, has low strength and high defense). This stat distribution means that in combat situations, brigands often have a difficult time hitting their enemies (due to the low skill). However, if they do land successful hits, they are capable of inflicting considerable amounts of damage. When attacked, they often sustain tremendous damage themselves due to their relatively low defense, although their high HP helps immensely in countering this, much like Fighters. They are also able to cross peaks and mountains like Berserkers, but not water.

Most games with a sword-using Lord have the player fight brigands as the most common units in early stages, due to the Weapon Triangle advantage and their generally low hit rate.

Some enemy brigands in Thracia 776 possess the Steal skill, being the one of the few non-thief class/promotion to ever utilise this ability.

In Fire Emblem Gaiden, Fire Emblem: Path of Radiance, and Fire Emblem: Radiant Dawn, Pirates are rolled into this class, with the Bandit class being assigned to both land and seafaring ruffians.

In Fire Emblem: Three Houses, the class is freely able to be reclassed into granted that the unit passes the Certification Exam. Though only an Intermediate class, the Brigand is an essential class for most physical based units to reclass into as soon as possible as it has the highly coveted Death Blow skill as a Mastery skill, which increases that unit's Strength by 6 when they initiate combat, granting them even greater power.

Concept artwork of the Bandit class from Path of Radiance.

Artwork of the Bandit class from the TCG.

A Level 1 Brigand, as he appears in the first series of the TCG.

A Level 10 Brigand, as he appears in the fifth series of the TCG. 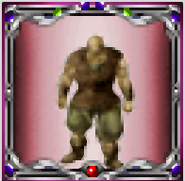 Generic class portrait of the Brigand class from TearRing Saga.

Speaking portrait for a generic Brigand in Radiant Dawn 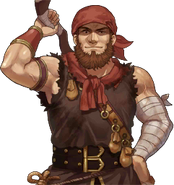 Generic class portrait of a Brigand from Echoes: Shadows of Valentia.

Screenshot featuring a Brigand with an Iron Bow from The Binding Blade.

Battle model of the Brigand class from Genealogy of the Holy War.

sprite of a brigand in Tearring Saga

Attack animation of the Brigand class from The Binding Blade. 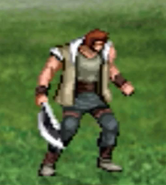 Battle model of a generic Brigand class in Berwick Saga

Battle model of Zawana, A brigand from Path of Radiance 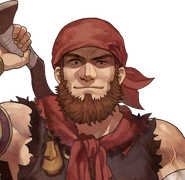 Generic class portrait of a Brigand from Fire Emblem Echoes: Shadows of Valentia.

Battle model of an enemy generic Brigand from Echoes: Shadows of Valentia. 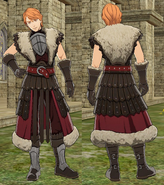 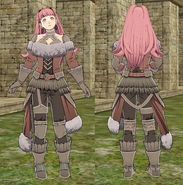 Leonie as a Brigand in Three Houses.

Critical animation of the Brigand class from the GBA games.

Map sprite of the Thief class from Gaiden.

Map sprite of the Bandit class from Fire Emblem: Mystery of the Emblem.

Map sprite of the Brigand class from Genealogy of the Holy War.

Map sprite of the Brigand class from TearRing Saga.

Map sprite of the Brigand class from The Sacred Stones.