For the location in Fire Emblem: Three Houses go here.

Sniper (as Brigid, Genealogy of the Holy War)

Swordmaster (as Eyvel, Thracia 776 and Awakening)

Caitlyn Elizabeth
[view]
“Dobarl, enough! I won't allow any such nonsense! I've got a creed to uphold, and pilfering is no part of it. We Orgahil Pirates are known for giving to the poor, not taking from them!”
—Brigid in Genealogy of the Holy War

Brigid is a playable character from Fire Emblem: Genealogy of the Holy War and Fire Emblem: Thracia 776. She is one of the daughters of Duke Ring of Yngvi, the older twin sister of Edain, and the elder half-sister of Andrey. She is a direct descendant of Crusader Ullr and therefore can wield Yewfelle. She is also the first female character in the Fire Emblem series who is able to use bows. If she is paired up, her children will be Febail and Patty.

In Thracia 776, Brigid appears as the swordmaster Eyvel. If she is not recruited and alive by the start of Chapter 25, she will become the Deadlord Draco, who is a Sniper like Brigid.

Before Genealogy of the Holy War

At the age of five, Brigid was abducted by the Orgahil Pirates during their attack on Ring's ship, which was sailing towards Bragi Tower. She was raised by their captain and later succeeded him as captain after his death. Like the old captain, Brigid had the pirates steal from the rich and give to the poor.

When war breaks out in north Agustria, Brigid refuses to raid the coastal villages in the chaos in Chapter 3. Dobarl and Pizarl stage a mutiny, forcing her to flee the stronghold and fight off her former crew. Brigid comes to defect from her crew when Sigurd arrives on the scene, after which she is reunited with Edain. Although initially unable to recognize her sister, Brigid has her childhood memories restored when she is presented with the Yewfelle.

The sisters later discover that Andrey had murdered Lord Ring. Although Edain is troubled, Brigid vows to avenge their father regardless of who his murderer is. It is possible for her to do so if she fights Andrey at Belhalla in Chapter 5, where she calls him a disgrace to House Yngvi before killing him.

Brigid manages to survive the fateful Battle of Belhalla but loses her memories. Her survival and amnesia are implied to be the result of a dragon interceding, although the details are neither confirmed nor made clear.

Eyvel later found Mareeta chained and in the process of being sold at a slave market in Conote. Enraged by what she saw, she proceeded to murder all the guards and slave traders to save her. Unable to find Mareeta's father, Eyvel adopted her as her own daughter and raised her to be a swordmaster.

At a later time, a young Leif and Nanna arrived in Fiana with an injured Finn, where they begged Eyvel to help him. Upon seeing the two children, she wondered about their hardships, vaguely sensing that she had been through a similar experience in the past. On that day, she took in Leif and Nanna as her adoptive children, allowing them and Finn to hide in Fiana.

When Mareeta and Nanna are abducted by Raydrik in Chapter 1, Eyvel accompanies Leif on his mission to rescue them. When Nanna is held as a hostage against them in Chapter 3, she and Leif choose to surrender to Raydrik.

Afterwards, Eyvel makes an agreement to travel to Munster's arena with Raydrik to be reunited with Mareeta and Nanna. However, Eyvel finds Nanna alone in the arena, and they are forced to fight against Raydrik's men while he observes from afar. During the battle, Raydrik calls a possessed Mareeta into battle against Eyvel, surprising both her and Nanna. Once Leif arrives at the arena, Raydrik panics out of his fear of Eyvel, causing Veld to petrify her with the Stone spell.

In the event that the player goes to Chapter 24x, Eyvel's petrification can be reversed by Sara through the power of the Kia Staff. After escaping from the resulting battle alongside Leif's army, she has a reunion with several of the other characters. Once she reveals that she does not remember her past, Finn tells her that he believes her to be Brigid from Sigurd's army. However, she denies this due to not possessing the holy markings of Ullr on her body.

After Munster is liberated, Eyvel decides to return to Fiana instead of joining Seliph's army with Leif. Years after the Liberation War ends, she regains her memories and is reunited with her birth children Febail and Patty.

Due to her pirate upbringing, Brigid is rough in her mannerisms, speaking bluntly and always ready to fight. Despite this, she differs from the pirates with her strong sense of justice, which sees her refusing to attack those weaker than her. This stems from her pirate father's principle of aiding the poor, which she continues to channel even after his passing.

Despite her strength of character, Brigid does have some insecurities relating to love. If she is paired with either Jamke or Midir, she worries that they only married her because they were in love with her twin first, seeking reassurance from them before the Battle of Belhalla.

In Thracia 776, Eyvel plays the role of a mother to the other members of the Fiana Freeblades, and is fiercely protective of her charges. Responsible and dutiful as a mother, these traits also extend to her role as their teacher in imparting combat skills to her charges.

Brigid joins late in the first generation at the end of Chapter 3. She joins you as a Pre-Promoted Sniper with excellent offense-oriented base stats. This is offset somewhat by her lopsided and undesirable growths (focusing on HP and Luck, only of marginal usefulness to a ranged class). As soon as Brigid is recruited, Edain may talk with her to give Brigid the Yewfelle Bow. Brigid is the only bow unit in the first generation capable of wielding it, and it further cements her strong offense, giving her 60 base damage as soon as she joins. Brigid, much like Jamke, will likely annihilate anything she can hit.

Nonetheless, Brigid has very significant flaws. She is a footlocked unit, which is very unfortunate in Genealogy, particularly for an archer. Her lack of Canto means that it is difficult to position her in places where she cannot be attacked, and the Yewfelle's massive weight means that her Avoid is not nearly as high as it may seem. As an archer, Brigid cannot counter in melee, which is a very real problem when enemies in Genealogy tend to travel in squads. Additionally, Brigid's accuracy is surprisingly unreliable for a character with 22 base Skill, owing to Yewfelle's mediocre hit rate of 70. This creates something of a conundrum with Brigid; the Yewfelle is obviously overkill for dealing with normal enemies or fliers, and ineffective against groups, yet the bosses one would want to employ it against tend to have high enough Avoid (typically through Leadership and terrain) to make it unreliable. This can be allayed through the Skill Ring, which is in otherwise fairly low demand, or by using Sigurd's own Leadership and Lachesis's Charm, but Sigurd tends to do well enough at killing bosses by himself.

Brigid has some minor issues to worry about when choosing a husband. While both of her children are physical units (Patty, a Thief, and Febail, a Bow Fighter) that will want the same stats, one child will begin with Pursuit while the other gains it through Promotion. Brigid will pass on no skills to her children, as her Pursuit is a class skill, and any personal skills will come from her husband.

Unlike most pairings, Brigid will pass her inventory to her son, and her daughter will inherit from her father.

Febail will be a strong unit regardless of his father and inherits the Yewfelle, along with having Pursuit as a class skill, so the player can focus on Patty. Although they do not have any conversations, Chulainn is a popular husband thanks to the Luna skill. Jamke and Naoise are also decent pairings. Dew, Finn, Beowulf, and Lex will result in average children, and the rest do not provide useful skills or growths.

In Chapter 3, Sigurd may speak to Brigid, but nothing will result of it.

In Chapter 3, Edain may speak to Brigid, resulting in Brigid receiving Yewfelle.

In Chapter 3, if Midir speaks to Brigid, she will gain 100 love points with him.

In Chapter 5, after Phinora Castle is captured, Brigid may speak to her lover if he is Alec, Jamke, or Midir, but nothing will result of it.

Eyvel falls into the Jagen Archetype, although she has her own quirks. During the first few chapters of the game, she can easily defeat any enemy thanks to her great base stats and Fire Sword. She also has 8 Movement and possesses a flag that makes her immune to death until the end of Chapter 5. While it is not recommended to let her kill all the enemies, she can easily defeat the more daunting bosses. The Fire Sword is particularly useful for this, as it inflicts magic damage, piercing through throne defensive boosts.

After Chapter 3, Eyvel will temporarily leave the player's roster like most of the other units. Unlike them, however, Eyvel's inventory will be deposited in the convoy and she will briefly return in Chapter 5. This time, she is in the arena protecting Nanna. By moving both of them to the 1-tile chokepoint near the door, the player can keep Nanna safe from the enemies. Once the door to the arena is opened, Eyvel will be petrified and you are forced to leave her behind.

You will not be able to re-recruit her again until Chapter 24x. Sadly, her stats are not nearly as dominant as they were before. Still, she provides a leadership star and can still function as a decent combatant in the Final chapter due to her high Sword rank.

Orgahil Pirate
Gallant and determined, she was separated from her family as a child and raised by a pirate leader. Appears in Fire Emblem: Genealogy of the Holy War.

“Shut up! You killed Father, you patricidal maniac! You're a disgrace to the House of Yngvi, AND you've tarnished the reputation of the Crusader Ullr!!”
—Brigid's battle quote versus Andrey in Chapter 5
“...is this... the end...?!”
—Brigid's death quote

"Returning to Fiana for a time, Eyvel temporarily led a quiet, peaceful life. Eventually, her "geas," the compact she had made with the dragons, expired. And with its end, her memory returned, seven years after the end of the holy war. Her belated reunion with her children became the subject of a timeless song, known to any bard who can play a lute..."

Brigid is illustrated in the trading card game with the following cards: 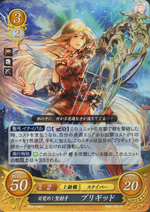 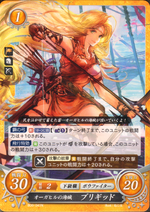 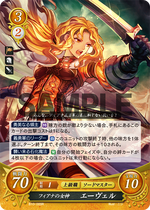 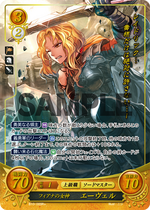 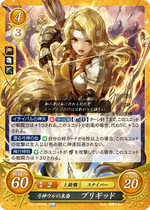 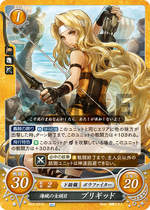 Brigid is the name of a goddess in Celtic mythology. The name also belongs to an Irish patron saint.