[view]
“When y'all were hidin' in yer cellars and attics, we were toe-to-toe with Daein. And look at us now...”
—Brom, as he defeats someone pursuing the revolution.

Brom is first encountered in Chapter 10 of Path of Radiance, where the Greil Mercenaries invade a jail to free Crimean prisoners of war. Imprisoned in a cell to with Kieran, he expresses terror at the prospect of undergoing torture, alongside a fear that he may never see his family members again. When Ike speaks to Brom after successfully breaking him out of his jail cell, he gratefully gets up to leave with the mercenaries, albeit rather clumsily, as he develops cramps from sitting down on the "hard floor" of his cell for too long. After the mercenaries finally rescue all the prisoners, Brom reveals that he is, alongside Nephenee, a "simple country [militiaman] from the same territory", and has merely joined Ike's forces to prevent his fields from being wrested from his possession. He then resolves to fight for Crimea's freedom in Elincia's name, promising to "send [the] Daein milksops packing".

In a Base Conversation he shares with Ike in the preceding chapter, Brom is observed to become emotional over a leather pouch of stones, which his family members have put together for him to keep as a "sort of a good-luck charm". He then calls himself "silly" for behaving embarrassingly, to which Ike comforts him by asserting that his family is proud of the actions he has undertaken to aid the war effort.

Brom will then remain with the Crimean Liberation Army until the Mad King Ashnard is eventually defeated, whereupon he will return to his beloved family in Ohma.

Brom returns in this game at the start of Chapter 2-1, where he is observed to engage in a friendly conversation with his fellow neighbor, Jacob, in the village of Ohma. Nephenee then enters the scene to inform him of a revolution brewing nearby, urging him to "suit up" quickly and join her in quelling the rising disorder. After receiving an Iron Axe and a Herb from Nephenee, Brom will then set foot onto the village square with her, where a group of young village men have gathered in front of an armored general. They are then informed of plans being formulated to "dethrone the queen", to which Brom responds by loyally sticking up for Elincia's honor, asserting the fact that he was allied with her in the previous war. The armored general takes advantage of Brom's claims and further brainwashes the men, claiming that the pair are the queen's agents, and are "undoubtedly [spying] on them". A conflict will then break out between the two groups of people, with Brom and Nephenee emerging as the victors. Realizing that their actions have essentially jeopardized the safety of their fellow villagers, the pair decide to leave the village and inform Elincia of the dire tidings.

At the start of the Chapter 2-2, Brom and Nephenee are observed to have already reported their findings to Elincia, who apologizes for the ordeal that their village has been put through. As she goes on to doubt her ability to carry out the duties expected of a Queen, Brom reassures her by proclaiming that she has done a "bang-up job" of governing Crimea, and encourages her to never give up in learning the ropes. He will then remain with Elincia's forces, playing a significant role in protecting Fort Alpea's defenses from being breached by Ludveck's rebels.

Brom returns to the game in Chapter 3-2, where he aids Ike's forces in the Laguz Alliance. He is spared when Ashera later casts her judgment upon Tellius. Brom can then be brought into the Tower of Guidance in order to reverse her judgment and save the people from suffering untimely ends.

After the war has well and truly ended, Brom will return to his farming lifestyle in Ohma, vowing to never set foot onto the battlefield ever again.

On the whole, Brom is a down-to-earth individual, and likes neither war nor violence. He is also rather sensitive, as can be observed in his support conversations with Boyd. In this set of conversations, Boyd's ability to fight at a young age is first discussed, whereupon Boyd changes the subject to that of the prison break, ridiculing Brom for "STILL [being] a big fatty!". Being the tactless individual that he is, Boyd proceeds to question whether "all that jiggling" slows Brom down in battle. Brom evidently expresses hurt at Boyd's harsh words, leading to Boyd attempting to compensate by offering to train with him and "whip [him] into shape in no time".

* Only if Lance mastery level is at D or lower.

Stat-wise, Brom has very stereotypical armour knight stats, being strong in strength, defence and HP while being having weak speed, resistance and luck. He joins around the same time as Kieran, Marcia, and Jill, all of whom are much more worthwhile recipients of experience due to the advantages of being mounted. The niche of being a tank means little when other classes of units can also tank hits quite reliably, sometimes even dodging them outright. Even compared to his fellow Knight, Gatrie, Brom doesn't stack up favorably. Gatrie joins only a few chapters later and has better or equal bases and growths in almost every stat. All this isn't to say Brom is unusable, just that he is outclassed. If you want to use Brom, it's recommended that you give him the knight ward to boost his speed growth to a respectable 55%. There are also a few maps around his join time where he can choke points to gain easy experience.

Brom has a few unique features to offer in Radiant Dawn. He is the only Axe General available, and sports very good growth in HP, Luck and Defense. Additionally, he has a very large amount of availability making him a rather easy unit to train. However, once Part 3 is reached, Brom still does have use, but does face stiff competition from Gatrie, who sports better bases, weapon ranks, and growths in Strength, Speed, and even Skill and Resistance. They will both be extremely useful for defense chapters, such as 3-5, but overall, Gatrie outclasses Brom in most stats bar Luck and HP if they both promote after reaching Level 20. Brom has many uses in Parts 2 and 3, but may be sidelined in the Tower of Guidance for more versatile Armor Knights, such as Gatrie, or even other axe users altogether, like Nolan, Boyd, Haar and/or Titania. Overall, he is a useful unit, but does have some noticeable flaws.

"Whew! Am I glad that's over! When I saw King Daein, I was sure I was done for! Or that he'd torture me... But you were a bull! Thank you! Now I can go home and see my family once more!"

Returning to his family in Ohma, Brom farmed for the rest of his peaceful life. He never lifted a weapon again.

Brom is illustrated in the trading card game Fire Emblem Cipher with the following cards: 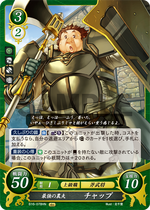