The Bronze Lance (青銅の槍 Seidō no yari) is a Lance that first made its debut to the series in Fire Emblem Awakening. The weakest and cheapest of Lances, the Bronze Lance is, however, not the most common, as the slightly stronger Iron Lance fills this role. Unlike the Radiant Dawn iteration of this lance, the Awakening one is capable of performing Critical attacks. However, this ability is lost again in Fire Emblem Fates.

*To be replaced by an actual stat sheet as soon as possible. 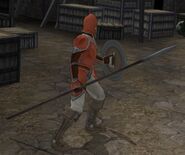 An enemy Soldier wielding the Bronze Lance in Radiant Dawn.