Chapter 23 The Ghosts of Bern

Julia Mcllvaine
[view]
“Bern will never die! Even if I fall, Bern will rise once more!”
—Brunnya

Brunnya is a boss character in Fire Emblem: The Binding Blade. She is a trusted vassal of Zephiel and one of the three Wyvern Generals of Bern.

Early in the war, after conquering Sacae, she, along with Narcian and Zephiel, leads an assault on Castle Araphen, where the leaders of the Lycian League are conferring on the matter of going to war with Bern. They decimate the League's army and defeat and severely wound Lord Hector of Ostia, the League's leader. Shortly after, Zephiel requests that Brunnya bring Hector before him. After speaking with Hector and having him locked up in the dungeons, Brunnya informs Zephiel that she will return to Sacae, but first states her concerns by asking him why he works with a sinister figure like Idunn. Zephiel deflects her question by informing her that someone of her level of faith in and devotion to him should not question his wisdom and should simply follow orders, to which she complies.

Later on, at Taras, Brunnya learns that Aquleia has been reclaimed by the Etrurian army, now under the command of General Roy, and that Narcian has been killed in battle. Roartz and Arcard, two former Etrurian nobles who had sided with Bern, have fled to Sacae, wishing to seek refuge in Bern. Brunnya reassures the two that as allies of Bern, they will not be abandoned, and orders them to defend Bulgar and Taras respectively, while reminding them that they had it incredibly easy compared to the trials that Roy went through. Before leaving, she tells one of her soldiers that she is not at all impressed with their cowardice and betrayal of their country.

As the Etrurian army approachs Bern Keep, Zephiel, after learning of Murdock's death and knowing that he may die, entrusts Idunn to Brunnya and tells her to flee, lest they lose Idunn and the entire war be rendered pointless. Brunnya travels to the Dragon Sanctuary and in turn entrusts Idunn to Jahn, while she and the remainder of the Bern army prepare to defend the Sanctuary from Roy's forces, knowing fully well that the odds are against them and that they will die. When Roy does arrive, Brunnya tells her forces that because they have no chance of victory against the enemy, she will allow them to leave with no consequences. However, they refuse to leave, and the army expresses its solidarity with Brunnya and Bern. In spite of her determination, she and the rest of the army are killed.

Brunnya is recruitable in the trial maps after completing the game four times.

Devoted General
One of three Wyvern Generals of Bern. Although Zephiel causes her heartache, she is very loyal to him. Appears in Fire Emblem: The Binding Blade.

Brunnya is illustrated in the trading card game Fire Emblem Cipher with the following cards: 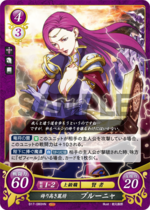 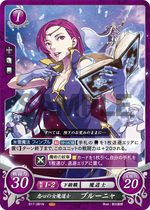