Bruno, initially identified as the Mysterious Man (identified in game as ???), is the secondary antagonist and final boss of the first Book of Fire Emblem Heroes.

A prince of Embla, he and his mother were despised by the royal family. Eventually claiming she shared imperial secrets with Askr, they imprisoned her, causing her to die in isolation, while he himself was banished to the border despite only being a child. Around this time, he and Princess Letizia entertained thoughts of a future together, but he later recognized this to be lies spoken for her own self interest and benefit.

Calling himself Zacharias to avoid suspicion, he later entered Askr and became friends with the royal siblings while still a child, all the while harboring a hatred of Embla and planning its destruction. He taught Sharena how to fight with a spear, and together with her and Alfonse, joined the Order of Heroes under Commander Anna. He was forced to leave the Order when his family bloodline's curse started affecting him, leading him to try to kill Alfonse at one point. Having tried to kill himself only to be prevented of doing so, he then proceeded to search for a method to resist the dark god's influence.

In his first appearance in Chapter 9, he faces the Order of Heroes at first, but eventually aids them, as he warns about Veronica's attack on their summoning grounds. Later, he claims to have knowledge about Zacharias, but refuses to say anything more before disappearing.

In Xenologue 1, he asks Veronica whether she feels as if someone is controlling her actions, so which she replies that sometimes the word "kill" pops up in her head, and then she wants to do so.

In Paralogue 3, he is reading through the tome of Bramimond at the World of Blazing, learning that the royalty of a certain nation has the blood of a wicked god, which uses the royalty as puppets, as they are unable to fight the god's influence; the text states this god is known by many names and that its true name has never been written until that point, but the name is not there, much to his frustration. He then proceeds to acquire some information from that world, as it is the home of the Dragon's Gate, a portal to other worlds. He says that he must also find information on something of his, but this is left unsaid. At the end of the Paralogue, Nino gives Alfonse a hand-written letter from "Zacharias", where it is stated that Bruno is the true antagonist, not Veronica.

In Paralogue 5, Bruno calls Veronica back to the castle after her mission in that world had failed, then warns the Order of Heroes that he won't hesitate to kill them if they get in his way.

In Chapter 10, Bruno finally reveals his identity as the prince of the Emblian Empire's imperial family, and an older brother to Princess Veronica that has rarely been seen by the public. He also states that he does not want Veronica to conquer Askr, and gain the all of the glory. Later on in the chapter, he appears to Kiran as Zacharias to aid Kiran in escaping the World of Radiance, and also tells Kiran to watch out for the friends who knew him as such. This eventually leads to Alfonse, Sharena, and Anna try and call for Zacharias through a rite in Chapter 11 and, still keeping his guise, tells them that they're wasting their time, stating that he killed Zacharias when he got involved with issues that he shouldn't have, leaving Alfonse shocked. Before he leaves, Bruno tells Alfonse and Sharena that they are next.

With the Askrans pressing on by this "revelation", Bruno continues to remind the Order about how he killed Zacharias, even presenting Zacharias's lance before he fought the group himself. Upon being defeated, Bruno begs for death and reiterates he was Zacharias's killer, and while Alfonse was considering to execute Bruno, Kiran tells Alfonse about what they experienced at the World of Radiance when Zacharias helped them flee. Theorizing that they may have actually been speaking to Zacharias, Alfonse asks Bruno if he is actually Zacharias, which causes him to not only confirm the Order's suspicions, but also reveals his backstory, and later on reveals that he has tried to pit himself against them in order to kill him in his stead. As he vowed to continue his search to break the curse, Bruno asks Kiran to look after the friends who knew him as Zacharias, and requests that he be killed if he ever makes another attempt on Alfonse or Sharena.

While he doesn't appear in the First Intermission, it is stated that he urged Anna to investigate a set of ruins where the power to awaken the potential of Sacred Seals rests.

While absent for the majority of Book II, he does manage to save Hríd from Múspellian forces and hands him a map to the source of the Rite of Flames while explaining its purpose and how it can be undone. He returns in person later on to rescue his sister.

Despite not appearing in Book III, his absence along with Xander's is explained as the two went on a quest prior to the events of Book III with Veronica waiting for them to return.

After a two book absence, Bruno finally appears at the Tower of Niðavellir and manages to repeal all the enemies that the Order of Heroes were fighting. He then tells the group that Niðavellir is now attacking the Emblian Empire and requires their assistance despite the hostility between the two kingdoms. Remembering how Veronica helped them against Hel, and Freyja, Alfonse agrees to help and set out to stop the invasion.

Sometime after Niðavellir's attack on Embla, Bruno and Xander continue their search for a way to break Embla's blood curse. Later, Bruno requests the Order of Heroes for help and informs them about the coming of Veronica's execution in ten days. He fights Letizia's propaganda against his sister by sowing doubt in the hearts of the people, ultimately swaying the public in Veronica's favor. Veronica is then able to incite a rebellion against Letizia with the guards of the prison Letizia has thrown her into, forcing the vassal houses of Embla to choose sides. Meanwhile, Bruno and the Order of Heroes confront Letizia, and fight her until Veronica arrives and chooses not to execute her.

Bruno seems to harbor a caring nature, though it is not very noticeable and does not appear very often. He places his kindness in the Order of Heroes, as he tells them hints and news as to what to do and where to attack, or helping and defending them when they're in danger, such as when he warns them when the summoning grounds are being attacked, or when he defends Kiran from an ambush from Veronica. His kindness is shown when he tells Alfonse that he was about to kill him in the past, and harbors regret for his actions. He also cares for his sister Veronica and even asks her about if she's been hearing voices, out of worry of the cursed blood they share.

He is quite manipulative, as most of the time he seems to be carrying out plans in the background before his debut. He uses both his alias and his own identity to manipulate and control the people around him and the outcomes before discarding the alias.

Masked Knight
A masked knight whose identity and motives are a mystery.

Masked Hare
Prince of the Emblian empire, whose lineage remains something of a mystery. Dressing as a rabbit isn't clarifying things for anybody.

Bruno is illustrated in the trading card game Fire Emblem Cipher with the following cards: 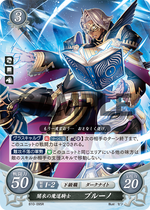 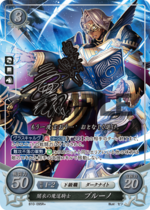 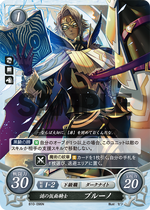 Bruno is a male given name. It is derived from the Old High German name Brun meaning Brown.

Zacharias, also transliterated as Zachariah and Zechariah, is a theophoric masculine given name of Persian and Hebrew origin, meaning "God remembers". It comes from the Hebrew word zakhar, meaning to remember, and yah, one of the names of the God.