General
[view]
“...It appears that further conversation would only be a waste of time. Though even if His Majesty desires it not, I will remain and protect him. I cannot allow the legacy of Daein to end here!”
—Bryce

He is one of both the Legendary Four Riders (also called the Great Riders) and Mad King Ashnard's Four Riders. He is also old friends with Greil when he was known as Gawain.

Bryce is extremely loyal to Daein and King Ashnard's predecessors. Even after Ashnard reveals to him it was him that killed the previous king, Bryce still believes the royal bloodline must be preserved.

Bryce is a man who has devoted his life to Daein. On many occasions, he is confused and somewhat insulted by the lack of care Ashnard and a few other Daein soldiers had when Daein lost a battle. This is seen if the player has Tauroneo fight him, during which he tells Tauroneo that he is fully aware that what Ashnard is doing is wrong, but believes that there is nothing he can do to stop his king. He is slain in Melior Castle's courtyard by the Crimean Army.

Unlike most enemies in the game, Bryce fought with honor, which Ike comments on when Bryce is slain by him. Bryce is unlockable for use in the Trial Maps by completing 10 playthroughs of the game.

Default
Bryce: I am Bryce, general of Daein!

Vs Ike
Bryce: So you're the enemy general, eh? You're much younger than I had imagined.
Ike: My age matters not. The palace will be ours this day.
Bryce: We will not relinquish it so easily. But allow me to introduce myself as befits a warrior. I am Bryce of Daein.
Ike: And I am Ike of the Greil Mercenaries. Now let us begin.

Vs Ena
Bryce: Ena... You, too, have had your fate warped by the king. You should pray that you at least know peace in your final moments.

Vs Tauroneo
Bryce: Ah, Tauroneo... I see that you have found another path to follow. Perhaps you were inspired by my old friend Gawain.
Tauroneo: Tell me, Bryce. Beyond mountains of corpses, what do you see Ashnard bringing to the future of this place?
Bryce: ...I see nothing, save for a land of absolute darkness and terror.
Tauroneo: Then why fight by his side?
Bryce: Some men can change, Tauroneo. Others cannot... I am of the latter type. There is no other reason.

Bryce is illustrated in the trading card game with the following card: 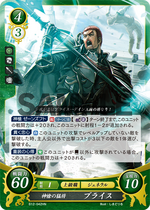 Bryce as a General in Fire Emblem 0 (Cipher). 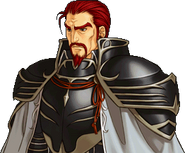