Yada Koji
[view]
Bulzark is an enemy character in Fire Emblem: Archanea Saga and Fire Emblem: New Mystery of the Emblem. A Fire Dragon Manakete, Bulzark serves as the boss of the episode, The Beginning.

Bulzark is a high-ranking general of Dolhr. Called by Medeus over Camus's refusal to surrender Nyna to Dolhr, Bulzark arrived in Archanea's millennium palace with an army of 220 members of Dolhr's elite troops, when Camus escaped with Nyna and four ex members from the Sable Order of Knights, Bulzark quickly deduced Camus sought to reach the Aurelis to deliver Nyna to safety with Hardin, one of the few men to stand against Dolhr.

Bulzark and his army quickly caught up with Camus and Nyna, the Manakete doing everything he could to stop them from reaching Aurelis.

If Bulzark is alive when Nyna reached Aurelis, the general has Camus captured and tortured to show everyone the price of defying Dolhr. If Bulzark is killed in the battle, Medeus himself arrives to punish Camus.

Bulzark is a intelligent and cunning commander, as well as a powerful force in the battlefield. His craftiness and adaptablity could be seen in him figuring out Camus's escape attempt and advising his troops to go after the slower Nyna once Camus reached the ganf of brigands obstructing their path.

Like many Manaketes, Bulzark viewed humans as inferior to himself. Despite this, Bulzark valued the lives of his skilled battalion of human soldiers and was willing to attempt diplomacy with humans. He offered Camus and his knights leniency from Dolhr if if they surrendered Nyna and hired a gang of bandits to help his cause.

“Those who dare to oppose Emperor Medeus have only death waiting for them!”
—Bulzark's battle quote in Shin Monsho No Nazo 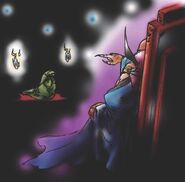