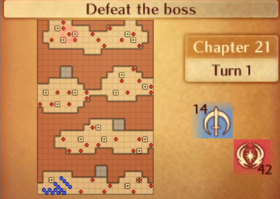 Chapter script
[view]
“Making their way out of Fort Dragonfall, the group continues onward. Thanks to a map from the Rainbow Sage, they are able to reach a mythical destination.”
—Opening Narration

This map is divided into four areas littered with both promoted units and Stoneborns. Stoneborn are units that have a 1-5 space attack range and hurl rocks at your units, dealing massive damage if it connects, though have low accuracy. Taking them down is also difficult given their high defense, though their resistance and speed are critically low. Units with Golembane also deal bonus damage against them.

To progress through each segment, Dragon Vein must be used. Each statue has two Dragon Vein tiles in front of them. Using one will either result in the area being flooded with lava or opening up a bridge to the next area. Once a Dragon Vein is activated, the twin dissappears. The Dragon Vein that opens up the bridge is the one directly underneath the white orb the statue is holding. If lava flows into the segment, enemy reinforcements will appear from the four holes in each area for three turns. The lava harms your units and also reduces movement of all units except flying units and Takumi if he is wielding Fujin Yumi. The bridge will open once enemy reinforcements in that sector are cleared if lava spilled in. The lava will also spill in if you take too long in each segment. The only way to avoid taking damage from the lava is either by placing your units in the holes (they will also heal your units) or on plain tiles.

The quickest way to beat this chapter is to bring a large amount of flying units with powerful ground units to take out enemy opposition in the way. Flying units can pass through the cliffs and into the next segment. Always remember that there are bow users in each area so switch to your ground unit once you touch down in a new area. While this strategy is relatively safe on Normal Mode, it is extremely risky on Hard and Lunatic.

If you are less concerned with speed and simply don't want to accidentally trigger lava the normal way, just activate the dragon vein that aligns with the statue's raised arm. It will always be correct. This allows the party to move forward as normal.