Julie Ann Taylor
[view]
“I want to help! I really, really do! I'm tired of sitting home alone and waiting to be of some use. I'll never be as perfect as you are, Father. But I'd like to start trying to be!”
—Caeldori in her Paralogue

Caeldori is a playable character in Fire Emblem Fates.

Caeldori is the daughter of Subaki. She can also be the sister of the Male Kana or Shigure if Subaki achieves a S-Support with the Female Corrin or Azura. Like the other children of Fates, Subaki placed her in the Deeprealms to protect her from the war. From time to time, Subaki would come to visit and Caeldori would hear of his many accomplishments. Inspired by them, Caeldori devoted herself to train and eventually become perfect like her father.

In her Paralogue, Subaki pays her Deeprealm a visit. There she informs him that she has been practicing and studying to be a worthy Sky Knight. Suddenly, a Hoshidan soldier informs Subaki that invisible forces are attacking a nearby village. Caeldori wants to join in the battle, but Subaki tells her to stay behind since she has never seen real combat. Unwilling to stand idle, Caeldori flies onto the battlefield and requests that her father let her join in the fight. Though hesitant, after seeing his daughter's resolve, Subaki allows her to join the battle. After a long fought battle, the invisible forces are defeated. After the battle, Caeldori informs Subaki of all the measures she took after the battle to ensure the safety of the villager and getting them the treatment they need. Overwhelmed by his daughter's overwhelming diligence in her post-battle event reports, Subaki allows Caeldori to join the army, though he vows to himself to stay ahead of her.

If Selena is the mother of Caeldori, a special ending occurs. Selena notes that Caeldori used to resemble Subaki as a child, but now she resembles her maternal grandmother. Caeldori remembers how Selena used to talk about her and even felt that Selena and Cordelia resembled one another. Selena still believes that Caeldori resembles her more, both in appearance and in personality. Honored to resemble such a great warrior, Caeldori vows to work harder to make her mother and grandmother proud. Selena ends by vowing not to die on her or abandon her, but Caeldori does not understand the significance behind this last comment.

Caeldori is gifted with both intelligence and beauty, and strives to constantly better herself. She feels the pressure of her father's fame and diligently hones her skills in hopes of one day becoming perfect like him. She bonds well with her mother, stating that she has no natural talent like Subaki. Instead she states that her mother's hardworking nature inspires her to become a better person herself. She easily falls in love more than the other members of the army. In her supports, she is known to be an avid reader, and she also requests that Corrin be her mentor after having heard Subaki speak highly of them. In her supports with the female Corrin, it is revealed that she is a very talented writer so much so it brings the female Corrin to tears of joy calling it the most beautiful thing she ever read. Caeldori is shown is her supports to be snippy with characters such as Asugi who skip out on chores or shirk their duties.

Caeldori is illustrated in the trading card game Fire Emblem Cipher with the following cards: 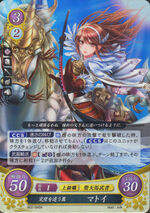 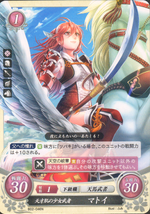 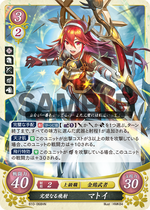 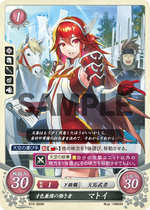 Caeldori is an anagram of Cordelia, the basis of her appearance. Although the name itself doesn't have a particular meaning, the 'Cael' part of her name could come from the Latin word 'caelum', meaning 'sky' or 'heaven', possibly being a reference to her class. Additionally 'dori', an alternative reading for 'tori' (鳥), means bird in Japanese, another possible reference to her class.

Matoi (纏) is a flag used in Edo period Japan by firemen to notify people of a fire near or within a building. This is referenced in her support conversations with Shiro, where they talk about fire safety. It is also an anagram of Tiamo, Cordelia's Japanese name.

Artwork of Caeldori for Fire Emblem 0 (Cipher) by Fumi.

Artwork of Caeldori for Fire Emblem 0 (Cipher) by Fumi.

Artwork of Caeldori for Fire Emblem 0 (Cipher) by HMK84.

Artwork of Caeldori for Fire Emblem 0 (Cipher) by HMK84.

Caeldori as a Sky Knight in Fire Emblem 0 (Cipher).

Caeldori as she appears in Fire Emblem 0 (Cipher) as a Falcon Knight. 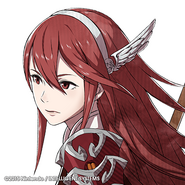 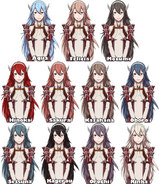 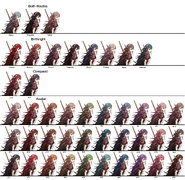 Caeldori's battle model as a Nohr Princess in Fates