[view]
“...Sire, I... I cannot bear this! Failing to protect His Majesty... then leaving my brothers to die, slinking away like some coward... This indignity is too much to bear! One day I will repay them in kind. I will avenge the fallen... I swear it!”
—Cain to Marth in Shadow Dragon

Cain is a playable character from the Archanea Series of Fire Emblem. Alongside his boon companion Abel, Cain is a cavalier of Altea who is also known under the alias of The Bull.

According to Takayashiki Hideo's novel adaptation of Mystery of the Emblem, Cain is 24 years old as of the War of Heroes. [1]

Prior to the fall of Altea Castle in the Prologue of Shadow Dragon, Cain fought under the banner of King Cornelius, who led the charge of the resistance against the betrayal of Gra. After King Cornelius tragically fell in battle, Cain was assigned the task of delivering his final words to Prince Marth. While enduring several wounds that he had sustained during the battle, Cain promptly rushed off in the direction of Altea Castle.

Cain succeeds in reuniting with Marth at the end of Prologue II of Shadow Dragon, just after Marth escapes from Altea Castle with Abel, Frey and Jagen. In the following chapter, after hastily brushing aside Marth's concern over his wounds, Cain delivers the late king's final words, which are as follows: "Tell my son that I leave the future of Altea and our continent in his hands. He must rise now where I have fallen. As Falchion’s rightful heir, he has been born into greatness… Now… he must be great." Should Cain be selected to act as the decoy of Marth in Prologue IV, he will thus not be available to assist his liege in bringing the War of Darkness to an end. Canonically, Cain is not selected to be the decoy, and after the War of Shadows concludes, he devotes his time towards instructing young recruits in warfare.

Chronologically, Cain returns in Prologue III of New Mystery of the Emblem, where he is observed to have become quite proficient at being an instructor of newly-inducted recruits of the Altean Army, taking charge of the practical training of the 7th Platoon, then comprising of Kris, Luke, Roderick and Ryan. Cain then proceeds to test their mettle against the might of several allies of the previous war in the ensuing chapters of the Prologue, and if the player fulfills the necessary requirements, he will personally challenge them in Prologue VII.

Shortly before Marth sets out to fulfill his covenant with Emperor Hardin in Chapter 1 of Mystery of the Emblem and its remake, Cain is entrusted the task of defending Altea Castle. After Altea Castle falls to the combined might of Gra and Aurelis at the end of Chapter 4, Cain manages to escape, reuniting with Marth at Chiasmir Bridge in Chapter 8. He will thereafter aid Marth in bringing the War of Heroes to a conclusion, whereupon he is promoted to assume the command of the Altean Knights following Jagen's death.

He appears as the Mirage partner of Touma Akagi. A “Cavalier” from another world who has lost his memories. Since he and Touma are kindred spirits, he’s a good big brother figure for Touma. In combat, he transforms into a lance to lend Touma his power.

Like a majority of the cast appearing in Shadow Dragon and the Blade of Light and Mystery of the Emblem, Cain's character is not very well developed. Nevertheless, it is possible to deduce several points about his personality based on the few interactions that he has. Similar to many other knight characters in the aforementioned games, Cain is passionately loyal to the liege that he serves, willing to overlook his personal welfare in order to fulfill his duties. This is especially evidenced through his firmly sticking to the final task assigned to him by the late King Cornelius, in spite of the grievous wounds that he had sustained in battle.

Despite this, Cain has also revealed signs of being emotional, a fact that is depicted through his ardent, yet sorrowful, outburst in Prologue III, where he vows to avenge the deaths of his king and fellow comrades. Through this outburst, it can also be determined that Cain views his role as a knight of Altea with immense pride, as he deems his sole survival amongst his beloved comrades to be a representation of cowardice and disgrace.

Cain's devotion to Altea is one that transcends his representing the country on the battlefield; following the end of the War of Darkness, he devotes his life towards honing future generations of Altea's knights to secure the country's defense.

Whether or not the player decides to use Cain, Abel or both depends on both personal preference and the actual title that they appear in. Both are very useful and preferred in games that are generally considered to have a poor roster of characters. While their differences sometimes vary, certain common points hold true across all games; Abel excels in Strength, while Cain excels in Luck.

In Shadow Dragon and the Blade of Light, Abel has more balanced growths compared to Cain, sporting a higher strength growth, despite slightly lower growths in HP, Skill, and Speed. With the exception of Luck, Abel's base stats are all equal to, or higher than Cain's. He is preferred in this game by many players for his well-rounded stats and superior strength growth, which proves to to be more useful than the slight skill and speed growth lead that Cain possesses.

In Book 1 of Mystery of the Emblem, Abel and Cain's growths are nearly identical to before, aside from a significant decrease to Cain's HP growth (from 90% to 60%), one of the three superior growths defining Cain in the first game. Notably, both start out with bases that contradict their respective growths, setting the precedent for the Cain and Abel archetypes of future titles. Cain starts out with higher Strength but lower Skill and Speed, while Abel starts out with less Strength but more Skill and Speed. They end up very similarly in Book 1, largely because their growths balance out their bases, and despite their stats eventually going in different directions, they still perform very well regardless.

Yet in Book 2, the differences between the two are far more noticeable: Cain joins as a cavalier early into the game (Chapter 8), while Abel is recruited as a pre-promoted paladin much later (Chapter 15). This gives the player far more time to use Cain than Abel; when Cain is trained to the same level that Abel appears as (Level 1 Paladin), Cain will often have superior stats in every area. Cain regains his higher HP growth advantage, where it is increased to 90%. If fully trained, both Cain and Abel can easily cap Strength, Skill, Speed, and even Defense with a little help from the Starsphere (due to the rather low cap of 20 in Mystery of the Emblem). However, on average, Cain will cap 52 HP and 20 Luck, compared to Abel's usual maximum of 41 HP and 13 Luck.

In Shadow Dragon, Cain and Abel are similar to their appearance in Book 1 of Mystery of the Emblem. Both start out somewhat alike, with Cain slightly stronger but less swift and skilled, and Abel's bases the opposite. In this game, Cain and Abel actually have identical Speed and Skill growths, but instead have different Weapon Ranks - Cain can use Steel Swords from the start, while Abel can use Javelins from the start. Abel is commonly placed higher on Shadow Dragon tier lists due to his higher strength growth and most importantly, his higher lance rank at base. Cain's E rank in lances makes it difficult for him to reach C rank to use the Ridersbane, while Abel's D rank means he doesn't need as much effort. The difference in their weapon ranks is enough of a split for many to consider Abel better.

In New Mystery of the Emblem, the differences separating the two are once more made distinct. For the first time, their Defense growths do not match, with Abel's 40% growth being slightly higher than Cain's 35% growth; oddly enough, Abel has a higher HP growth than Cain (100% to 90%), swapping the HP discrepancy of the two characters. Abel upholds his reputation of being more balanced, while Cain supersedes him in Skill and Speed (70% to Abel's 60%). This game being a remake of Book Two of Mystery of the Emblem, Abel once again joins later while Cain is recruited much earlier. In the end, Cain proves to be the more reliable character. Abel's growths, while arguably better, are nevertheless hindered by his later arrival, poor bases for his join time, and the high amount of cavaliers recruited by the player.

Overall, in all games that Abel and Cain appear in, they prove to be valuable members of the army, being shining jewels among the sea of mediocre or bad characters.

The Bull
Altean cavalier known for his recklessness. Rode with Abel in service of Marth. Appears in Fire Emblem: Mystery of the Emblem.

King's Voice
"Cain remained in Altea to instruct younger knights in the ways of war. He was a shining example; never did he neglect his training."

In the Fire Emblem anime, Cain serves an almost identical role to that which is portrayed in the games. His personality, as implied in Shadow Dragon, is notably more hot-headed than that of his partner Abel's. This is most evident when he brings up the troubles of Princess Nyna and the Kingdom of Archanea, where he fervently argues the following:

“I think we should send in our soldiers now! How many months have passed since Princess Nyna of Aurelis stood up and declared her attempt to overthrow Dolhr's oppression? And during that time, not ONE kingdom has been willing to answer her call to arms! And every day the soldiers of Aurelis are weakened by Medeus's dogs of war! We MUST take action before Aurelis is destroyed!”
—Cain in the anime

Gordin is in strong agreement with this plan, but it is quashed by Jagen, who believes that Marth still needs people to protect him. Later, Cain is seen during the attack on Talys when he kills a pirate. As the pirate dies, he tosses a child into the air. Abel catches it in the nick of time, before resignedly remarking that he cannot believe that he is still picking up Cain's messes "after all these years".

Cain and Abel are obviously very good friends in the anime, despite Abel being seemingly unwilling to support Cain's argument about Nyna. They are rarely seen apart in the anime and even have a toast to friendship as they oversee Gordin discussing his archery skills with Draug. In Episode 2, Cain and Abel travel to Galder in the guise of travelers, which allows them to slaughter unsuspecting pirates patrolling the town; this leads to Marth's liberation of Galder.

Cain's importance in the manga is far more important than in the anime and even the game itself. He is portrayed as a young knight who is strictly loyal to his country, but mostly to Prince Marth. He is often teased by Abel and Julian, but still gets along with everybody well nevertheless.

After the victory over Doluna at Aurelis' secondary Castle, Ogma gets Cain drunk; he wakes up the next morning with a huge hangover. For this reason, Abel takes his patrol shift and ends up meeting Est.

Cain is illustrated in the trading card game with the following cards: 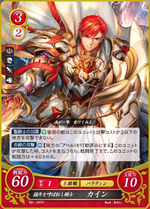 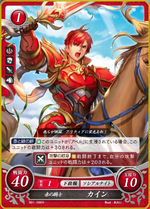 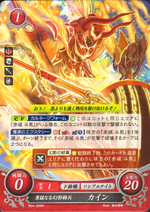 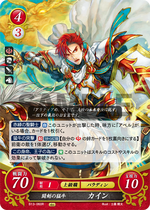 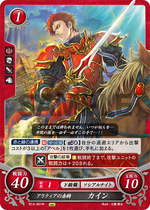 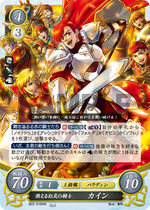 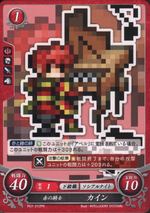 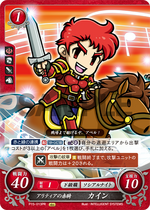 Cain's name comes from the biblical story of Cain and Abel in the book of Genesis. Cain became jealous that God favored Abel's sacrifice more, and therefore killed him and was cast out of God's favor. In Mystery of the Emblem, this is slightly reversed: Abel falls out of Altea's favor for treason, although this does not involve Cain.