Jake Eberle
[view]
“Especially we laguz. Without a fight now and then, we go a bit strange in the head.”
—Caineghis, in the Epilogue

The valorous king of Gallia, home of the beast tribe and a pivotal laguz nation in the war. Befitting of the name “Lion King”, he is endowed with an impressive physique and nuanced political insight.

Wanting to preserve the friendship between the Kingdom of Crimea and Gallia he had fostered during Ramon’s time on the throne, he declared a soldier exchange program. During that time, he met a young Titania. He also employed Greil as a mercenary and found him to be a particularly brave man, which was also how he met Ike.

When news of the Daein invasion reached Gallia, Caineghis quickly mobilizes his soldiers, but later laments that he was too late to prevent Greil’s untimely death in battle.

After safeguarding Princess Elincia of Crimea, he continues to offer support and manpower as she sets off to the Begnion Empire by sending Lethe and Mordecai with Ike, and later sending Ranulf to help them fight as well.

When preparing for the showdown with Ashera, he and Giffca were guided by a voice in their dreams, whose orders were to retrieve Greil’s memorial battle axe Urvan from his grave and entrust it to Ike. After the war, he abdicates the throne to Skrimir and lives the rest of his life peacefully, with countless songs telling of his valor.

As the King of Gallia and friend of King Ramon of Crimea, he wants nothing more than to see beorc and laguz live together in harmony, although he admits that it is still difficult for him to trust most beorc.

Though he is famed for his impartiality, wisdom, and strength, viewing the Laguz-Begnion War with certain calmness, it has been said that he was as boisterous and brash as his nephew Skrimir in his youth. And while he does not say it out loud, he greatly looks forward to hearing of Skrimir’s deeds and accomplishments.

Caineghis is a very powerful character. He comes in the endgame boasting a massive HP and attack. He should not have any problem defeating most enemies in one hit. His weakness to fire is also not much of a problem considering the lack of fire enemies in the Endgame. He is a character well worth using.

Gallia's Lion King
The lion ruler of Gallia, the home of the beast tribe of laguz. Uses his wisdom and courage to seek a path toward peace with the beorc. Appears in Fire Emblem: Radiant Dawn.

Caineghis is built to represent the maximum potential of beast units as a stalwart beast armor unit who can not only take attacks, but dish it back with utter ferocity. His low mobility is a minor tradeoff for a heavy emphasis on combat during the enemy phase, especially given his exceptional physical bulk and astronomical base Atk. He may have an average Res, but this hardly matters in the long run as his strengths, namely through is weapon, help to cover this. Even his speed, while quite low, is easily patched. His performance all around is so universally well covered that it is hard to find any means to take down this Lion King.

Lion King Fang has the beast unit traits of transforming himself into his Lion form if he is either by himself or adjacent to only dragon/beast units. Regardless if he is transformed or not, he gains a +4 to all four of his main stats when his foe initiates on him. If he is transformed however, not only does he gain a +2 Atk buff, but he also gains a Distant Counter effect, not only freeing up his Skill A for other options, but also opening the door for crazier skill combinations.

Bonfire is a natural fit for him, using his 37 Def neutral base to significantly power up his attacks when charged. Distant Defense is his Skill A and he introduced the Fourth Tier variant, not only giving himself a massive 8 Def/Res when attacked by a ranged foe, but also eliminates visible buffs, leaving them to face off against Caineghis with just their natural raw power. Vengeful Fighter shores his low Spd, allowing not only a follow-up in the enemy phase, but also accelerating his Special cooldown. Distant Guard grants his allies a Distant Defense effect if they are within two spaces of him.

His base kit focuses more on being attacked than initiating combat himself. Caineghis loses much bulk and some offense when he initiates, thus baiting him with bulky units of your own is an option. He is weak to all armor weapons available, though some prefer to give him Svalinn Shield to cover his only real unit weakness. He is a colorless unit and Raventome/Triangle Adept units can actually hard check him, making them a valuable counter. Otherwise, skills that can negate his Distant Counter such as Dazzling Staff are solid options.

As mentioned above, Svalinn Shield] covers his only true weakness for the initial months since his release as there are a lack of weapons that deal effective damage against beast units themselves. Swap or Pivot grants him some of the mobility he is missing. Special Fighter is another option to inflict a Guard like effect on his opponents while accelerating his special cooldowns. Skill C can range from Beast unit support skills or even Armor skills, particularly so he can be used alongside Armor Dragons with powerful movement skills like Armor March.

Upon returning to Gallia, King Caineghis lost no time in abdicating his throne. Countless songs still tell of his valor.

King Caineghis busily dealt with affairs of state and coped with a changing world until a new heir could be chosen.

Caineghis is illustrated in the trading card game Fire Emblem Cipher with the following card: 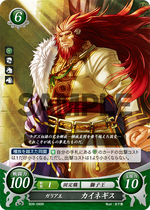