Not to be confused with playable character in FE13, see Kellam.

General of the Begnion Central Army

Callum (カジーザ Kajīza) is a boss character from Fire Emblem: Radiant Dawn. He is a general serving under Zelgius in the Begnion Central Army.

Callum is stationed at the top of the mountain passageway to prevent the Gallian forces from interfering with Zelgius' and Skrimir's duel. His forces are obliterated and he is eventually killed by Ike and Ranulf.

Although, having no major involvement with the plot, Callum seems to be extremely loyal towards Zelgius, and has deep respect for him for his unmatched strength. It could be hinted in his battle quote that he had no means to engage his enemies, rather, hold his position and allow them to pass once Zelgius' duel with Skrimir was over, but falls in battle before it took place. He's also shown to resent the Laguz, and even refers them as Sub-Humans, as do most Begnion generals.

Default
Callum: None shall pass. General Zelgius forbids it!

Vs Ike
Callum: You will not gain the peak, nor shall I yield my position. You will wait for the duel to finish.
Ike: Duel?
Callum: Correct. The general does not wish to be disturbed during his duel. I'm certain that it be over very soon. You may then pass and fetch the carcass of your general.

Vs Ranulf
Callum: So, sub-human. Are you worried about your general?
Ranulf: You bet I'm worried! Without us looking after him, who knows what kind of trouble that hothead might get himself into. You can see we're in a big hurry. Get out of my way, or I'll move you. Painfully.
Callum: Never! If you wish to reach the top, you must "move" me. Do your best, sub-human. 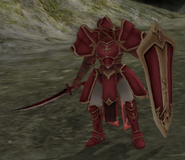