∞
[view]
The Caltrop (まきびし Makibishi) is a Shuriken that is introduced in Fire Emblem Fates.

It reappears as a Dagger and a weapon skill in Fire Emblem Heroes called the Caltrop Dagger.

In Fates, apart from raising its wielder's Speed by 2, the Caltrop reduces the Speed, Defense and Resistance of its target by a substantial amount upon successful striking. The Caltrop does, however, induce its wielder to suffer Strength and Skill penalties post-battle. Unlike other Shuriken, the Caltrop is limited to a range of 1. It makes up for its lack of range with having the best speed, defense, and resistance debuffs in the game by a considerable margin.

In Heroes, the Caltrop Dagger functions as an inheritable anti-Cavalry dagger weapon, complete with the typical dagger debuff effects. In addition; the weapon has the effect of Hardy Bearing built in; preventing alteration of attack priority. Due to this; it is a carbon copy of the Dusk Uchiwa; though more available due to being in the typical summoning pool.

The Caltrop Dagger is the default weapon of Julian.

The Makibishi is the Japanese version of the caltrop. It is believed that they were among the tools utilized by Ninjas. They were designed to be able to puncture the Waraji sandals commonly worn in Feudal Japan. 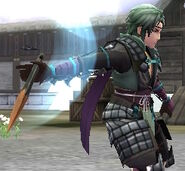