Camilla (カミラ Kamira) is a playable character in Fire Emblem Fates. She is the second eldest child of the Nohr royal family. She is voiced by Miyuki Sawashiro in the Japanese version.

Camilla is the second eldest child of the Nohrian royal family and the daughter of the king and an unknown woman. Eventually, Camilla received another younger sibling when the Avatar was adopted into the family. Her wyvern's name is Marzia. She has the services of Selena and Beruka.

In Chapter 13, a desperate Camilla is hard-driven into killing the Avatar. After she is defeated and the Avatar explains why they're doing what they're doing, she seems empathetic enough to join them until Leo interrupts them and gets ready to kill the Avatar until Crimson arrives with Ryoma.

In Chapter 23, Camilla finds Elise with the Avatar and her mind almost completely shatters, so she feels that she must kill all of the Hoshidans so that they will both come back to her. After she is defeated, both of them tell her that they are trying to change Xander's and Garon's mind to end the war without fighting. They then tell Camilla that everything will be the same as it was before and she thinks about that before fainting.

After Garon's defeat and Azura's death, Camilla and Leo appear in the end of the Birthright route, where Camilla decides to abdicate the Nohrian throne in favor of Leo, believing he would make the better ruler.

In Chapter 24, after the Nohrian Army defeats Hinoka, Camilla threatens to kill Hinoka if she does anything that would harm the Avatar, but then she reveals to her that Sakura and her group are still alive. After the revealing of Garon's true form, she, along with the other siblings, is reluctant in killing him, as she has difficulties reconciling said true form with the memories of the father she knew.

Camilla appears in Chapter 12, having been ordered by Garon to kill the Avatar or be executed herself. Despite her love for the Avatar, she resolves to kill her sibling herself so they won't be tainted further, but is defeated while trying to do so. She requests that the Avatar be the one to kill her, and is surprised when the Avatar instead explains their situation and offers her the chance to join their forces (over Takumi's protests). While she is not convinced by Flora's claims that the Avatar is a hero of legend, she and her subordinates Beruka and Selena join them nonetheless out of faith in the Avatar.

Camilla is an individual who is known to be especially affected by the cruelty of Nohrian politics, and it is implied to a certain degree she was once involved in them as the second eldest of the surviving children. As a result of this, she has thus bonded very well with her younger surviving siblings, caring for them when they were younger and generally acting as the maternal figure who was largely absent in their lives. The bonds that she has established with her siblings are ones that are evidently tenacious, a fact that sees her displaying a disturbing eagerness to kill everyone and anyone who poses as a threat to their safety.

The affection that she displays towards the Avatar is one that is particularly pronounced to the point where she has, on numerous occasions throughout her appearances across all the routes in the game, displayed an unhealthy obsession that she harbours for them. In Chapter 23 on the Birthright route, for one, following the end of the battle, she loses control over her emotions entirely, unreservedly breaking down and begging the Avatar to return to her side all so she can continue to pamper them with her attentive affections again.

Camilla is known to enjoy bathing the most. Her birthday is November 30.

Birthright Chapter 6 - Reaching for the Light

Camilla ultimately originates as the feminine of camillus, a term for a youth serving as acolyte in the ritual of ancient Roman religion, which may ultimately be of Etruscan origin.

Artwork of Camilla in the Cipher Trading Card Game.

Artwork of Camilla in the Cipher Trading Card Game.

Camilla as a Wyvern Rider in Cipher

Camilla as a Malig Knight in Cipher

Camilla as in Wyvern Rider in Fire Emblem 0 (Cipher).

Camilla as in Basara in Fire Emblem 0 (Cipher).

Camilla as she appears in Fire Emblem 0 (Cipher) as a Wyvern Rider. 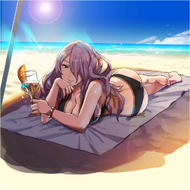 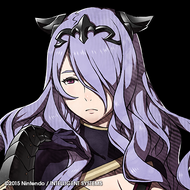