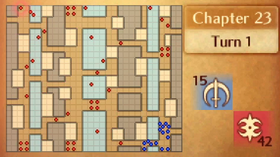 Chapter script
[view]
“Following Shura's directions, the group makes use of a secret underground passage. As they make their way forward, a dangerous enemy confronts them.”
—Opening Narration

While the Hoshidans take the path that Shura suggested to them, Arthur and Effie, Elise's retainers, find her with the Hoshidans. Believing that they have kidnapped her, they decide to report this to Camilla before leaving. Meanwhile, the Hoshidan army continues along the way, noticing a large amount of sprung traps and corpses from them. Elise notices someone following them, which is revealed to be Camilla, who was alerted to their presence by Elise's retainers. She is not persuaded as easily this time by Corrin and vows to kill their Hoshidan friends to make them realize the truth again.

After the battle, Corrin tells Camilla that they are only here to persuade Garon and Xander to stop fighting so peace can be brought. With Elise supporting Corrin's claims, Camilla finally believes them. She faints from the wounds during battle, but is in stable condition. Her retainers, Selena and Beruka allow the Hoshidans to leave while they return Camilla to her quarters.

There are three Dragon Veins in a horizontal line on this map and they are exclusively used by Camilla. Each respective Dragon Vein launches a fireball that each targets a specific duct lines. All allies in the duct targeted take a fixed 10 damage, but cannot be killed by it. Note that these Dragon Veins do not expire after use, Camilla can continually use them each turn for the entirety of the battle.

This map is a long slog, given that your units will be constantly at the mercy of Camilla's Dragon Vein usage each turn. As mentioned above, Camilla will be launching fireballs at the beginning of each of the enemy's turn, dealing a constant 10 damage to all allies in the duct that she targets. Camilla will always launch her fireballs towards the duct that contains the most allied units. Units inside any of the middle hallways between the ducts are not damaged by any fireballs launched. Because Camilla's attacks are incapable of killing your units, if there are no immediate threats in range, feel free to leave them open without healing them. Alternatively, units with Renewal have the heal as insurance to keep themselves healed. Other units with Amaterasu and Azura with her Healing Descant also helps to heal other allies. Keep in mind, this only applies after the enemy's turn of attacks. It is better to utilize sturdier units as your frontline to ensure survival, but avoid getting swarmed.

Arthur and Effie appear as enemies in the chapter. Both use Brave weapons and can be a threat if they get lucky with their hits. To make them allied units, simply have Corrin talk with one of them. Elise will tell the respective retainer that she is with them and are going to talk with Garon and Xander. They will then tell the other retainer (the one you didn't talk to) about this, turning both of them into allied units. Arthur has a tendency to suicidally charge the enemy, while Effie remains motionless. Neither will join your party as permanent members, and there is no reward for saving them, so don't worry too much about Arthur getting killed.

Once you get close enough to Camilla's position, she and her flunkies Beruka and Severa will start to move away from their Dragon Veins allowing you to cover more ground.

Almost every enemy on this map is mounted, either on wyvern or on horse. Armorslayers, Beast Killers, Wyrmslayers, and bows (preferably Iron or better) are extremely useful here. On Lunatic mode, rushing head-on into the central tunnel is extremely dangerous, as you will be onset by upwards of 15 mounted units with competent and varied attack power, backed by Camilla's deadly Dragon Vein attacks and another set of enemies advancing from the northeast. Instead, you should dedicate a few units to take out the enemies up north, deal with whatever enemies in the central tunnel you can by using a durable guard stance pair, then retreat to the 'safe zone' choke points and hold them off from there. Once the initial rush of enemies is over, you can take shelter in the safety zones and wait while reinforcements gradually spawn across the map. Note that the Dark Knight and Malig Knight reinforcements lack physical weaponry, and may be dealt with by a high-resistance unit such as Kaze.