General
[view]
“Where is the damn wyvern brigade?! Hurry! Close off their escape!”
—Campari's quote from Turn 2 in Chapter 9.

Campari (Pomodoro in the Japanese version) is an enemy boss character from Fire Emblem Awakening.

He and his forces guard the Plegia Castle Courtyard as it is invaded by Chrom's forces, who are trying to save Emmeryn. He is shown to be very bitter with Chrom's forces, calling them scum and claiming killing him will only feed Plegia's rage. 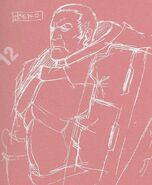