Chapter 4: The Land of Sorrow (Gaiden, Alm's route)
Chapter 4: Joy and Sorrow (Mystery of the Emblem)

Paladin (Shadow Dragon and the Blade of Light, Mystery of the Emblem, and Awakening)

[view]
“So long as Grust continues to support Dolhr's ambitions, it does not matter what I know or think. I am a knight; I have a duty to fight for my motherland's glory till the very end.”
—Camus to Nyna in Chapter 20 of Fire Emblem: Shadow Dragon.

Camus, later known under the aliases Zeke and Sirius, is a character who appears throughout the Archanea Series. He is the leader of the Sable Knights of Grust. His king decides to ally with Dolhr, and despite his sense of honor and integrity, he obeys his country and fights against Marth. He is said to be the most able warrior alive. He is 29 years old according to unused internal data in Fire Emblem Echoes: Shadows of Valentia.

When Grust forged an alliance with Dolhr, he did not protest, unlike General Lorenz. When Nyna was sent into the Sable Order's custody, and when Dolhr ordered for her execution, Camus took her to Aurelis so that Hardin could protect her. When Archanea was looted, one of the Three Regalia, Gradivus, was given to Camus. Unfortunately, for incurring the wrath of Medeus by helping Nyna escape, he was put on a short leash. When Nyna explained all these events to Marth, he knew Nyna wished for Camus to be spared should they ever face him in battle. Camus eventually faced Marth's army where Marth attempted to persuade Camus into joining his cause. Despite Camus knowing that Marth's army was the just ones in the battle, his unwavering loyalty to his country prevented him from leaving his position. Even with Nyna's protests to convince Camus to fight against Dolhr, Camus reluctantly continues to remain loyal to his country to the bitter end. In the end, Camus is seemingly killed in battle, much to Marth and Nyna's regret.

In reality, he survived the battle and was washed ashore to Rigel in Valentia two years before the game's events. Without any memories of his past life, he was nursed back to health by Tatiana, a Rigelian saint whom he would later fall in love with. He was named "Ezekiel", Zeke for short by King Rudolf, and forged a common trust with the King and rose to become a high ranking general in the Rigelian army due to his sheer strength in battle. Before the war started, Rudolf told Zeke to look for a boy with a mark on his hand. He ordered Zeke to follow this boy as the boy would be destined to save all of Valentia. He opposed the war with Zofia but nevertheless followed orders. When fellow Rigelian commander, Jerome, disobeyed the King's orders by committing raids against villages, such as Rigel Village, Zeke attempted to stop him. However, this led to Tatiana being captured by Jerome's fellow traitor, Nuibaba, in order to force him to fight for them.

Should Alm's army kill Nuibaba, Tatiana is rescued and brought into his forces. Upon seeing Tatiana among Alm's forces, Camus immediately turns on Jerome's army. Zeke thanks Alm for saving his beloved, but states that he refuses to fight against Rudolf whom he owes a great debt to. However, when Zeke noticed a mark on Alm's left hand, he leaves the Rigel army and joins Alm's army. After the war, Zeke lived a happy life with Tatiana. He recovered all of his memories as Camus, but he chose to keep this revelation to himself and vowed never to tell her of his own dark past.

However, his happy life was put on hold when he received news of Hardin's ascension to the throne, subsequent fall to madness, and the appointment of the corrupt General Lang to rule over the occupied Grust. Donning a mask from Conrad and going under the alias of Sirius, he returned to Archanea to stop the madness. He first appeared to Ogma when the latter was protecting the Grustian royal children Yuliya and Jubelo from Macedon's Vikings, and is asked to join the Altean army fighting Lang. While he notes that he is not promising anything, he joins the army once the Vikings are defeated. During the war, when confronted by Belf, a former Sable Knight, who saw through the guise and identified Sirius as Camus. He explains his reasoning for hiding his identity: The revelation that he survived would incite an insurrection of Grust, with him serving as its symbol, which would be unaffordable in the war effort.

Later on, due to his true identity, he was able to snap Nyna out of her mind control from Medeus despite denying to her that he is Camus. She protests, but he states that she is tired and should return to Marth's side, followed by an apology which she overhears. After the end of the war, Camus left Archanea without another word to anyone except for Nyna, whom he told that he was returning to someone across the sea who was awaiting his return.

As Zeke, Camus loses all of his memories, but retains his honorable personality. While he does want to regain his lost memories, he is plagued by the idea that they may be ones of darkness and pain. As the story progresses, he slowly regains his memories. While painful, he chooses to bear these in secret for the sake of his new lover in Valentia, Tatiana.

Deep down, Camus is a very caring individual to those he has grown close with. This is best shown in his relationships with Nyna and Tatiana. Camus assisted Nyna in escaping the Dolhrian Empire's execution, thus betraying his country for the first time—and the only time (under his original identity). During his battle against Marth, Camus refused to betray his country, despite Nyna's protests and attempts to get him to fight for her cause. Nevertheless, he bids her farewell before the fight and recalls his time with her fondly. It is also due to her life being put in danger by Medeus that spurs him to return to Archanea later. Sadly, he bitterly turns her down once more as he already has another lover.

Tatiana is the person who he values above all others. She later becomes Zeke's Achilles heel as when she was captured, the threat of her own demise forced Camus to fight alongside Jerome, whom he despised for his actions. With her rescue, he promptly betrays Jerome and joins Alm's cause under Rudolf's orders to follow a man bearing the Brand. In his supports with Tatiana, he assures her that he would never leave her, even if his memories return and is highly receptive to her insecurities regarding him regaining his memories. While he eventually does regain them, he keeps his past a secret. Even when he returns to Archanea to save Nyna, he returns back to Tatiana as she is his true lover at the end of the day.

Zeke is a high-end Pre-Promoted unit that Alm can recruit near the end of his route. He starts with average to above average stats in everything but Luck and Resistance, and has excellent growth in everything except for Strength, which is average(and is offset by the fact that he starts with high base Strength). If you choose to level Zeke up, he will wind up very close to Mathilda in overall power. He is one of the best characters in the game, and he can hold his own as soon as you recruit him.

Help Description: A masked knight shrouded in mystery. Seems to have connections with Grust and Princess Nyna.

Help Description: A general from the Rigelian Empire.

Sable Knight
A knight who's devoted to his motherland, Grust. Wields the lance Gradivus. Appears in Fire Emblem: Mystery of the Emblem.

Mysterious Knight
A wandering knight whose face is always hidden under a mask. A mysterious figure told of only in records of the War of Heroes. Appears in Fire Emblem: Mystery of the Emblem.

“With this lance, Gradivus, I am all but invincible. A pity you had to waste your life.”
—Camus's battle quote from Fire Emblem: Shadow Dragon

Mystery of the Emblem Book 2 (As Sirius)Edit

Masked knight Sirius
"After the war he vanished without speaking a word..."

New Mystery of the Emblem (As Sirius)Edit

Mysterious Knight
"After the war, Sirius left without saying a word..."

Echoes: Shadows of Valentia (As Zeke)Edit

(If Tatiana is alive)
"The fires of war had illuminated the dark recesses of Zeke's memory. But he loved Tatiana too much to burden her with his tortuous past, so he chose to bear it in silence as they lived out their lives together."
(If Tatiana is dead)
"The loss of Tatiana, the woman who had loved him deeply and unconditionally, shook Zeke with grief. He abruptly vanished from Valentia shortly after the war ended, and while some claim to have sighted him in Archanea, none of those sightings were confirmed." 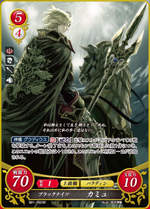 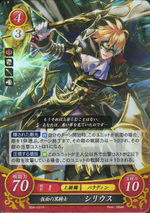 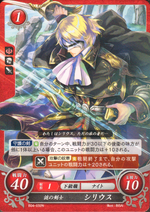 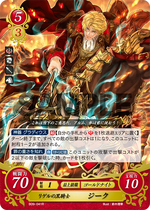 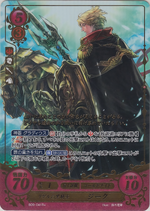 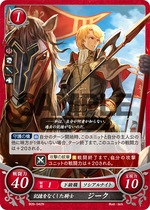