Chapter script
[view]
“It was General Ordwin, one of the Three Heroes of the War of Liberation, who put Grust on the map. His peerless knights tamed their neighbors the barbarians in the kingdom's infancy, securing its place as one of the greatest of the Seven Kingdoms. However, the current king, Ludwik, was weak-willed and easily cowed: Doluna had little trouble forcing him into an alliance. Now he had taken ill, even as Grust suffered its string of defeats at the hand of the League. The once mighty kingdom was poised to fall...”
—Opening Narration

Camus the Sable is Chapter 20 of Fire Emblem: Shadow Dragon.

In Shadow Dragon, having a Ballistician like Jake or Beck allows this chapter to be a bit easier. Just try to kill Camus from afar to get Gradivus from him. Or, to deal with the Ballistician without getting in someone's attack range, just place a general within their range, although you might want to keep a healer nearby. Another idea is to bring along units with a movement rate of 9 or greater, so that you may go immediately from being too far away to be hit, straight to being too close to be hit. 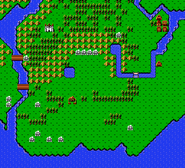