Joe Zieja
[view]
“Teaching illuminates the minds of both master and student... I will teach you everything I can!”
—Canas talking to Nino in their supports

Canas is a playable character in Fire Emblem: The Blazing Blade. He is the father of Hugh and son of Niime, and possibly Nino's uncle by marriage, as his wife's deceased sister Iris bears the same name as Nino's mother, and, by extension, possibly the great uncle of Raigh and Lugh.

The only recruitable Shaman, and potentially Druid, in the game, he can be recruited during Chapter 16x in Eliwood's Story or Chapter 17x in Hector's Story by visiting a home in the Port of Badon. Upon learning that the heroes want to reach the Dread Isle, he offers his services since he also wants to go there.

Son of the famed Mountain Hermit Niime, he inherited the ancient magics that has been passed down in his family for generations, albeit under strict training from her. In Canas' supports with Pent, it is revealed he has three brothers, but all of them eventually had their dark magic take control of their bodies, rendering them in an almost comatose state. Canas himself notes that it is likely he himself will end up like them if he continues to study dark magic, but though he is afraid of suffering the same fate of his brothers he continues because of his own curiosity, aware that it may cause the end of him.

At the start of The Blazing Blade, Canas is stated to be already married to an anima magic user, to his mother's initial chagrin, and he has an infant son named Hugh. Canas's wife is also stated to have had a sister with the given name Iris; while having heard that this sister is deceased, this given name is shared with a member of Nino's own family, her mother's. While noting that Iris is a rather common name, the fact that Canas's wife is an anima magic user and that Nino's family was made up of powerful sages suggests that Canas might be an uncle by marriage to Nino.

He first appears in Badon, shortly after Eliwood and his allies engage with Fargus and members of his pirate brigade. Due to wanting to visit the Dread Isle, but unable to find passage to the island, he offer his skills to the party. After helping them, he tags along in order to continue learning about areas outside of Ilia.

Afterwards, he died along side his wife while trying to stop a snowstorm before the events of The Binding Blade, leading to his son being raised by Niime.

Though masters of the ancient dark arts usually have a scary demeanor, Canas has a good and gentle nature that, along with his tendency to read on the battlefield, causes him to be unintentionally absent-minded to his surroundings and to the needs of other people. This is revealed in almost all of his support conversations, with other characters approaching him while he is in the midst of reading a tome, as his responses often revolve around him ardently describing the contents of his readings, oblivious to the bewilderment and sometimes chagrin of his conversational partners.

A passionate scholar, Canas' curiosity knows no bounds, since despite being a practitioner of dark magic, Canas also recognises the value of Anima magic, which he compliments as aesthetically rich. To this end, he even expresses deep admiration for one of its most prominent practitioners, Pent, in their support conversations. However, he does not think too much of the fact he is the successor to the notorious Mountain Hermit, despite her fame.

Description: A scholar, and a novice student of ancient magics.

Though Canas is the only Dark Magic-user in the game, this is largely irrelevant to his utility, as the majority of mage units function in a very similar fashion. The difference between Canas, Erk, and Lucius is largely minor, as they will do similar damage when raised and double similar enemy types. Though this does enable Canas to use a few extra tomes, Nosferatu is very heavy, limiting its utility by way of slowing Canas down massively, and Luna has 0 Might, making it mostly useless unless Canas is fighting either very strong magic enemies or certain bosses (and even then, he will likely not double them, meaning his damage will be somewhat low).

Canas's true strong point, however, is his strong uninvested performance and his good availability. Joining in The Port of Badon, Canas's stats make him a usable chipper even at base level due to the high might of Flux and his impressive 10 Magic. He tends to two-shot most enemy types, though his base Speed is decidedly sluggish; he effectively has only 7, due to being weighed down by even the lightest tome, and will probably only double exceptionally slow enemy types like Armor Knights. His accuracy is surprisingly decent, even with Flux, making him a very reliable source of ranged damage.

A further point in Canas's favor is his base level. While Erk and Lucius join at level 1 and level 3, respectively (particularly if the player refuses to play Lyn Mode), Canas is level 8, meaning he requires only two levels to consider promoting. Guiding Rings are available in the chapters after Canas joins, further reducing his cost. What is more, promotion gives Canas a fairly hefty boost; with the bonus to Constitution, he is no longer weighed down, and a +3 boost to Speed means that even a minimum-level promotion will give him around 12 Speed, enough to double all but the fastest enemies. The large boosts to Defense and HP will make him very sturdy for a magic unit, letting him battle closer to the frontlines. Lastly, he gains E-rank staff use, making him an effective healer; though his base rank is low, Canas can actually raise it fairly easily, as long as he uses staves whenever possible. If he can reach C-rank, then he can use Barrier, which will essentially ensure he reaches the higher ranks in time to use Warp.

In all, Canas is a fairly versatile magic unit who requires comparatively little work to do his job well. Though the other magic units are not without their advantages over him (particularly Pent), his mixture of durability, power, and strong promotion bonuses mean that it is hard to go wrong with him.

Note: This death quote is unlocked by clearing the game 8 times, or transferring save data from The Binding Blade in the Japanese version.

“Let this battle be forgotten by history... That is all I ask.”
—Canas' final chapter quote in The Blazing Blade.

Canas returned to his family in Ilia. Some years later, he and his wife died trying to stop a snowstorm. His child was raised by his old mother.

Canas is illustrated in the trading card game Fire Emblem Cipher with the following cards: 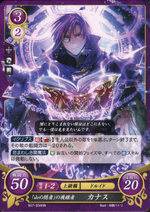 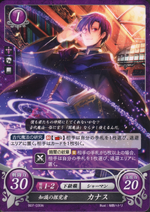 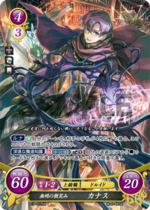 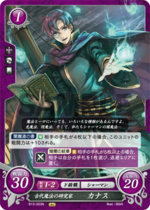 This may be a reach, but the name 'Canas' may be a transliteration of the Scottish name 'Knox,' which means 'round hill.' In medieval Scottish, the 'k' and the 'n' of the name Knox would both be pronounced as distinct phonemes [k] and [n]. Knoll's name also means 'small hill.' Additionally, 'canas' in the Spanish language means 'grey hairs' or 'white hairs', and in Latin, 'canas' means 'bright', suggesting the ancient source of his power and a reference to his scholarliness.