Candace is a capturable boss character from Fire Emblem Fates. A self-proclaimed legendary treasure hunter hailing from Nohr, Candace has dedicated her entire life to exploration.

While exploring the world in pursuit of treasured relics, Candace travels with a group of "barbarians" who appear to tolerate her; although not formally a part of the group, Candace claims that the barbarians are perfect for distracting foes while she flees.

Candace formally appears in Paralogue 6, where she bids a member of the bandit group that she is travelling with to steal a bag of Dragon Herbs from Midori. When confronted on her theft, Candace launches in a twisted defence of her action, justifying it as being no different from Midori "stealing" the herbs from the forest. A battle thereafter ensues with Candace attempting to flee with Corrin's army hot on her heels. The army eventually corners her and either strikes her down or captures her, recovering the stolen herbs.

Candace also makes an appearance in the DLC episode Museum Melee as a visitor from another world.

Owing to the minor role that Candace plays in influencing the plot, not much is known of her personality. From her involvement in the paralogue that she appears in, however, some aspects of her character may be gleaned. For one, she is portrayed as an arrogant, narcissistic individual, shamelessly indulging in self-praise when she unveils her identity before Midori.

Candace has also been depicted as a deceitful individual, tricking and confusing others through her clever twisting of words in order to justify the dishonourable actions that she partakes in. This fact is best evidenced through her confrontation with Midori, during which she deliberately uses periphrastic language to confuse Midori and justify her ownership of a bag of Dragon Herbs that she stole from Midori.

Thanks to her high base HP and reasonable Luck and Defense, Candace is slightly more resistant to physical attacks than the average Adventurer, though this asset of hers is not particularly useful to her. She tends to end up with decent Magic, a fact that when combined with her strong base Bow rank, allows her to inflict passable damage with the Shining Bow.

Candace is weak in the Speed and Resistance departments for her class, rendering her susceptible to double attacks and magic-based onslaughts.

The much more glaring issue with Candace is that she is the only playable unit that cannot reclass due to her model. As she is considered a Birthright boss, she has no unique skills of her own. Fortunately, she is able to learn her Outlaw and Adventurer class skills, though she cannot utilize the Bow Knight's Shurikenbreaker due to her inability to reclass.

As with all other captureable units, Candace is still able to utilize DLC tomes. While she cannot reclass because of her unique model, she is able to learn skills like Aether and Warp as long as the player acquires those tomes from their respective DLCs.

“Oh? Caught up with Candace, did you? Well done. But I warn you. I'm strong as an oak!”
—Candace's pre-battle quote.
“You caught Candace? You defeated Candace? Who ARE you?!”
—Candace's defeat quote

"Dragée" is a tiny, hard candy used to decorate baked goods. Likewise, Candace is phonetically similar to the word candy.

Concept art of Candace from Fates 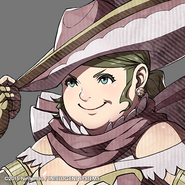 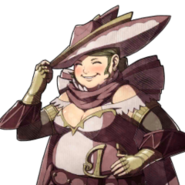