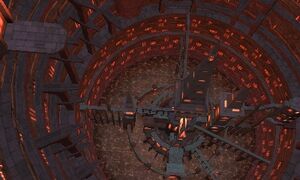 Castle Krakenburg is a location in Fire Emblem Fates.

Castle Krakenburg is the seat of the royal family in Nohr. It is located within a walled pit inside the capital city of Windmire, and serves as the residence of King Garon and his children Xander, Camilla, Leo, and Elise.

A Kraken is an immense sea creature in Scandinavian mythology commonly depicted to resemble an octopus. Legends and literature frequently describe them as fearsome and dangerous sea-dwellers that attack ocean vessels. Meanwhile, the term "Burg" refers to a German castle that is built for defense and protection, as opposed to a castle whose name includes "Schloss" (generally relaxing residences for the wealthy). Perhaps incidentally, Krakenburg was once the name of a castle in Wipperfürth, Germany.