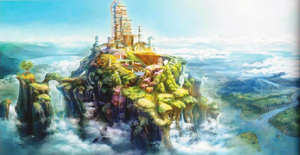 Castle Shirasagi is a location in Fire Emblem Fates.

Castle Shirasagi is the royal castle in Hoshido. It stands atop a sheer-sided mountain surrounded with the Hoshidan capital at its base, and serves as the residence of Queen Mikoto and her step-children Ryoma, Hinoka, Takumi, and Sakura.

Inside the castle is the Throne of Truth, which reveals the true personality of those who sit on it. The Throne of Truth was a gift from the king of Valla, according to Azura on the Revelation route.

Shirasagi is the Japanese word for Pure-white Heron (白鷺, or great egret). It is also the nickname of Himeji Castle, an 83-building complex near Osaka, which earned the nickname because the white plaster walls resembled an egret's or heron's outstretched wings.