Chapter 6: The Trap (Can join as early as Chapter 12: The True Enemy and as late as Chapter 22: The Neverending Dream)

Antonia Flynn
[view]
“...You don't know me? I'm Cath, a master thief!”
—Cath to Chad in a support conversation

Cath is a playable character in Fire Emblem: The Binding Blade.

A normal girl from the countryside at first, her village was burned down by her father by the order of some nobles, causing her to hate nobles with a deep passion and steals from them as a result. During her multiple encounters with Roy, Cath regarded him as a snobby noble at first and did not believe his sympathies when she told him her tale. Eventually, she becomes interested in how he lacks a noble demeanor, and becomes his ally after confirming he is truly unlike the rest of them after hearing that he would help her rebuild her village.

After the war ended, Cath declined invitations from various places to continue travelling alone. She kept an eye on whether or not Roy would be able to keep the promise he made to her when he invited her to be an ally.

Priding herself for being a chivalrous thief by stealing only from nobles, Cath is abrasive and frequently tries to steal from her own allies, but takes a genuine liking to her support partners and usually ends up giving back whatever she stole from them.

Because of the harsh mistreatment in the past, Cath has an extreme hate for nobles and influential people, and even despises her father for being the one to put the torch to the village, though Bartre points out that he likely did it to protect her and the other villagers, considering how their lord's soldiers were starting to draw their weapons.

Description: A young thief who steals only from the rich.

Roy must speak to Cath three times for her to be recruited. She first appears in chapter six, then eight, twelve (this is the earliest she can be recruited), sixteen, twenty (either version), and as late as twenty-two.

Note: Though the differences are slight, Cath will have marginally higher stats the later she is recruited.

Cath is the last recruitable thief in FE6. However, she still has her own places to shine if utilized correctly. For instance, if you recruit her in chapter 12, she can open the chests on the right side easily, meaning you don't need to bring a second thief or chest keys to accomplish this task. In chapter 16 in hard mode with a pure water, she can take a bolting or purge from the enemy mages and bishops, something Chad cannot do. Astore can also do this, but as the map is so big and there are chests on opposite sides, having two thieves is a good idea. Her utility generally stems from the chapters where you need two thieves, but also need them both to be able to take a hit, which Chad cannot do without extensive training that will be wasted on him as opposed to Cath doing it for free.

One common reason players decide to kill Cath instead of recruiting her is because it stops reinforcements in certain chapters. However, if you recruit her in chapter 12, she only spawns one thief reinforcement in chapter 8 besides herself. You can steal her lockpick or block the room and kill the other thief easily before they get anywhere near a chest if you play at a decent pace. Even if you do not plan to use Cath for anything, as you want to spend a lot of gold on chest keys or plan to skip chests, leaving her unrecruited is an option so you can steal her lockpicks over and over again, as they sell for a fair amount.

Master Thief
Mysterious girl who always seems to show up where there's treasure to be found. In truth, she is a thief known for outsmarting rich nobles. Appears in Fire Emblem: The Binding Blade.

Cath - Master Thief (怪盗 Kaitō)
"Cath set out to travel the world after the war. She then continued to give to the poor while exposing the secrets of greedy nobles and merchants. Her name remains in history today in 'The Legend of the Master Thief.'"

Cath is illustrated in the trading card game Fire Emblem Cipher with the following cards: 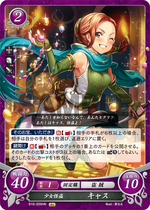