Julianne Alexander
[view]
“A little while back, someone told me I was cold and stand-offish. Do I really come across that way? Certainly I’m more reserved than either Est or Palla, but isn’t that true for most middle siblings? And whenever I DO have something to say, one of them always beats me to it! Who wouldn’t seem quiet in such circumstances?”
—Catria in Echoes: Shadows of Valentia

Catria (カチュア Kachua, Katua in the Japanese version) is a playable character in Fire Emblem: Shadow Dragon and the Blade of Light, Fire Emblem Gaiden, Fire Emblem: Mystery of the Emblem, and their remakes. She is the middle sister of the Pegasus Knights Palla and Est. She is 20 years old in Fire Emblem Echoes: Shadows of Valentia.

Catria is a member of the Whitewings, a Macedonian squad of pegasus knights commanded by Princess Minerva. When Minerva's younger sister, Maria, is held in captivity to blackmail the elder princess into fighting against the Archanean League, Catria and her sisters are forced to fight too. However, as Maria is rescued by Prince Marth, they become free to join his army and fight alongside Minerva again.

As the middle sister of the three Whitewings of Archanea, Catria often acts as the buffer between her two sisters and rarely pushes her own thoughts on the matter. She has a cool and serious personality.

Catria, and her sisters Palla and Est, are all Pegasus Knights recruited in Celica's route. When considering all of the Pegasus Knights in Gaiden, Catria and Est are both strong all rounders whose balance between Speed and Strength usually makes them the most offensively potent. Palla is strong and durable but slow for a Pegasus Knight, and Clair is very agile but fragile.

*Due to equipped Angel Ring

Catria is a useful unit in Heroes, with middling stats in almost all categories. Her speed is high, and her Luna skill will let her often do very high damage, and her somewhat low defenses are patched up by Armored blow and Seal attack enough that she will not have issues being killed except by bows and axes. Very few units can double her.

In the main campaign she is good at dealing with sword knights. Mages will trouble her a bit, specifically Nino and Julia, as her resistance is unfortunately low. 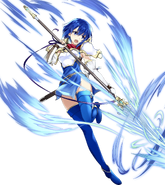 An illustration of Catria (along with Palla and Est) that appears in the Fire Emblem Memorial Book Archanea Chronicle. 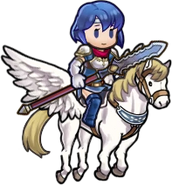 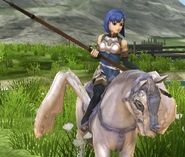