Caught in the Middle

Caught in the Middle 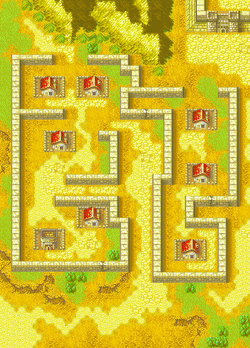 Chapter script
[view]
“In order to find the rebel forces and obtain some information about the bandits plaguing the Isles, Roy led his forces west along the coastline. On the way, he happened across a small village caught in constant conflict between the rebels and the marquess trying to get rid of them.”
—Opening Narration

Caught in the Middle (対立のはざまで Tairitsu ni hazamade) is Chapter 10B of Fire Emblem: The Binding Blade if you visited the right most of the two villages back in Chapter 9: The Misty Isles.

You start out from the bottom left hand corner of the map. Notice the broken wall nearest to you. Destroy it and make Alen, Lance, Ward, or Lot rush to the top left villages to protect them from reinforcing Bandits. Lilina should tag along if you want to recruit Gonzalez (However, he is in a higher level but with the same stats and lower weapon level so he's not so much worth of recruiting as in The Resistance Forces). If Clarine is at a decent level by now with high Speed and Luck and has a stable support with Rutger, leave them behind to await Klein's arrival. When he arrives, just make Clarine talk to him. Lugh should stay to help prevent the Cavalier reinforcements from entering your main base. Now, make Klein rush to the top with Clarine and make him speak to Thea quickly, who will by now have arrived with her units and started throwing Javelins at Alen and Lance. Visit the villages along the way. You should notice yet another Broken Wall near you again. Before destroying it, have a long-range attacking unit stand adjacent to the wall and let the Shamans come and attack, then kill them off. When entering the new hole in the wall, quickly make a competent sword-user kill the Fighter with the Killer Axe there. Then rush at Zinc, the boss. Zinc is not very difficult. He has very low resistance and Speed. You can use Lilina to kill him as long as she's strong enough with an A-rank support with Roy. While fighting him, have some units go around and visit the rest of the villages. Kill the Priests and the remaining Fighter if you want. When all this is done, just make Roy seize the Gate and you're done. Note that Thea's units will go after Zinc, to protect them you can rescue them or defeat Zinc quickly.