Cherami Leigh
[view]
“Let us show the continent the power of the Etrurian Generals!”
—Cecilia in a support conversation with Douglas in The Binding Blade.

Cecilia (alternately translated as Secilia in Path of Radiance's image gallery) is a playable character from Fire Emblem: The Binding Blade. She is the Mage General of Etruria as well as the former teacher of Roy and Lilina. Cecilia, Douglas and Perceval make up the three Etrurian Generals, one of the highest positions of authority in the Etrurian military.

Cecilia was born to a wealthy, aristocratic family and later was recognized as talented enough in magic to become a knight of Etruria. She studied under Pent, the then mage general of Etruria. Eventually, she went to Ostia where Roy and Lilina were studying and taught them the basics in battle arts, specifically showing Roy how to wield the sword and Lilina how to cast spells. Cecilia's opinions and way of thinking have great influence on Roy and consequently on the army, she becomes his mentor and one of Roy's close companions, potentially blossoming into love.

In the time period that Cecilia was teaching Roy and Lilina, she plays the role of instructor for the tutorial level, where she assists Roy in a training exercise against Bors and other members of the Ostian forces.

Cecilia was called away from her teaching occupation when she was recognized as a successor to the Mage General's title after the sudden retirement of her own predecessor, Pent. She faced great opposition and prejudice for taking on the role in her earlier days due to being the only female general, though she persevered nonetheless, and eventually gained the respect of all.

During the invasion of Ostia by Bern, Cecilia is first seen at the end of Chapter 8 with her troops, after responding to Roy's letter requesting help from Etruria when he is threatened by Narcian to surrender Ostia. Subsequently, she goes to the Western Isles to apologize to Roy for him being forced to accept leaving the mainland to follow Etruria's orders, and soon departs after taking Guinivere under her protection and promising Roy she would defend Lycia in his absence. Following Roy's success in dealing with the corruption in Western Isles, events take a turn for the worse in Etruria when a coup d'état breaks out and Cecilia flees from Aquleia with Guinivere, forming her own anti-coup d'état militia called the Loyalists to battle the Revolutionaries.

Unfortunately, the Revolutionaries, allied with Bern as well as two of the Etrurian Generals, are too powerful and drive the Loyalists back easily, forcing them to retreat to an old castle on Misul Peninsula. Cecilia guards the castle entrance, but by the time the Lycian Alliance Army, led by Roy, can go to her aid, she ends up facing Zephiel in single combat and is defeated. Despite her grievous injuries, she survives the battle and is captured by Narcian and thrown into a jail cell with Sophia, who treats her wounds. Once Roy seizes the castle, she reunites with him and joins him in his efforts against Bern thereafter. During the war, she may strengthen her relationship with either of her students or her fellow generals; become acquainted with Saul, whose flirtations she rebuffs; or discover the survival of Prince Myrddin, who she had believed to be dead.

At the end of the war, she continues her career as the Mage General of Etruria, playing a major part in her country's reconstruction, and is posthumously awarded the title as the "Maiden of Etruria" for her service. If she has an A-level support with Roy, after she moves with him and they both rebuild the land, she will marry him and become the duchess of Pherae.

Cecilia is an acknowledged prodigy who was a top student before she became a general. She is calm, patient, insightful and also a strong-minded individual with firm convictions. As an Etrurian general, she has leadership qualities and a keen mind for strategies. She is willing to follow her beliefs over her obligations unlike her colleagues Perceval and Douglas; as a result, she is the only general who rebels against the coup d'état in order to free her country from Bern's control rather than prioritizing the king's personal safety alone.

She is stubborn and shows an intimidating side when she is angered by others, as Elffin notes, though she is usually pleasant and diplomatic with most people. Cecilia is also too focused on reaching objectives by winning the small battles in the war, but often forgets the great scheme of the things, like the aspects of the warfare outside the tactics in the battlefield.

She greatly admires Douglas and aspires to be like him one day, and she shares a camaraderie with Perceval. She mentors Roy and Lilina by providing advice for them to be prepared for the day they inherit their respective territories. Cecilia has great influence over Roy decisions as he looks up to her, and she acts as a counselor to him, but as he gains confidence and matures in his leadership position, their relationship grow into both seeing each other as equals.

Cecilia makes a very poor first impression, joining with below-average bases and growths in a desert chapter that nullifies most of her advantages and renders her a constant target of status staves. However, when outside of that chapter, she tends to shine due to the advantages of her class. She is a mounted healer and a C-rank staff user, letting her wield Restore and Recover at base. Offensively, she possesses the highest base Anima rank in the game, which is most notable as it lets her wield Aircalibur at base, doing hefty damage to the powerful enemy wyverns even with her somewhat average base Magic. Cecilia can also rescue units, and as a promoted cavalry unit, is very mobile. On top of all of the above, she does not require the player to expend one of their rare Guiding Rings. Unfortunately, her mediocre Speed means she will rarely one-round enemies, and she lacks the evasiveness of most other staff-users. This means she is generally best used as a utility character, using her mobility and range to stay out of the line of fire while healing, ferrying, and chipping at enemies with tomes.

Etrurian General
Mage General of Etruria. Taught Roy and Lilina when they were young. Appears in Fire Emblem: The Binding Blade.

Festive Instructor
Mage General of Etruria. She is currently using her teaching skills to instruct visitors at the winter festival. Appears in Fire Emblem: The Binding Blade.

(After the battle ends and Cecilia is defeated)

“Etruria… Be a light…for the future…”
—Cecilia’s death quote in The Binding Blade.

Cecilia - Daughter of Etruria (王国の『娘』Ōkoku no “Musume”, Daughter of the Kingdom)
"Cecilia returned home and helped rebuild Etruria. Her calm judgment and leadership played a major role in directing Etruria to prosperity once again. Her hard work earned her the title of the "Maiden of Etruria" after her death."

"Cecilia accompanied Roy to Pherae, where she helped rebuild the battered land. She eventually married Roy, continuing to offer him close support and aid as the duchess of Pherae."

She appears in chapter 13 of the Hasha no Tsurugi manga where she is seen speaking with Eliwood about how she would like to send a group of troops to examine what is happening in the Western Isles after hearing that Roy's army may have engaged the Eturian army. Al and his group then volunteer for the position.

Cecilia is illustrated in the trading card game Fire Emblem Cipher with the following card: 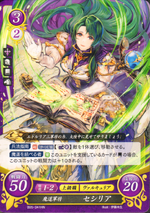 The name Cecilia is the Latinate feminine form of the Roman family name Caecilius, derived from Latin caecus (blind). Saint Cecilia was a noble lady of Rome who was, under Emperor Alexander Severus, sentenced to die, because she refused to worship the Roman gods. She is the patron saint of musicians.