This page is about the playable character. For the Crusader, see here

Chapter 8: Dragon Knights of Thracia (Genealogy of the Holy War)

Phillip Reich
[view]
“What is it that makes a crusader? Is inheriting an exalted weapon all it takes? No, there's not a doubt in my mind that you, too, are a crusader!”
—Ced in Thracia 776

Ced is a playable character from Fire Emblem: Genealogy of the Holy War and Fire Emblem: Thracia 776. He is the son of Erinys, the older brother of Fee, and, according to Thracia 776, the canonical son of Lewyn, as well as the inheritor of the Forseti tome passed down through Silesse's royal family.

His substitute character is Hawk in Genealogy of the Holy War.

During Silesse's occupation by the Grannvale Empire, Ced, along with the remaining royal family relocated to Thove, under the protection of Silessean rebels. When Erinys was suffering from a fatal illness, Ced departed from Silesse in order to find Lewyn, who had disappeared years prior, believing him to be the only one able to heal her. Upon arriving in Munster following a lead on Lewyn's whereabouts, he noticed the distress of the people under Raydrik's rule and decided to put his search on hold and stay there to help them. Encountering the Magi Squad and eventually becoming its leader, he attempted to stop the child hunts conducted by the Loptyrian Cult. During this time, he met Asbel, taking him as his apprentice and taught him the basics of magic, including how to wield the powerful Grafcalibur. These efforts and his fighting against the Grannvale Empire earned him the title of "Ced the Hero".

If Karin speaks to Ced in Chapter 4x of Thracia 776, she informs him of Erinys's death two months prior, and calls him out for neglecting his family. Before parting ways, Ced gives the Ced Scroll to Karin as a gift. After Seliph's liberation of Conote from Blume, Ced takes a stand against the Thracian army, which attempts to seize Munster under orders from Travant. In Thracia 776, Ced also gives the Bragi Sword to Saias, who in turn passes it to Leif.

After the holy war, Ced returns to Silesse and ascended the throne as king. Due to his hard work and unbending will, Silesse began to regain its former greatness.

Ced is an extremely selfless person who lives for the people around him, and is more than willing to lend a hand to anyone in distress. However, this might prove to be a flaw of his, as he winds up neglecting his own family in the process, causing him to be unable to see his mother off on her deathbed. Furthermore, he is also very humble, even to the point of self-deprecation; he reproaches himself for being a "coward", despite having played a significant role in stopping the child hunts, among other things.

Much like his sister, Ced is also furious at Lewyn for letting their mother die while waiting for him to return to Silesse, although he is slightly more forgiving than Fee is.

Ced is one of the few children of the second generation who is almost impossible to ruin. Regardless of father, he possesses incredibly high base stats, excellent weapon ranks, staff utility with a decent rank, Adept, and the all-important Pursuit skill. Despite his late joining time and lack of a mount, he will almost always perform well. Of note is that he is one of the only characters besides Julia who can use light magic, and while he cannot use her Nosferatu tome, he can use Lightning, which has impressive might, low weight, and weapon triangle advantage or neutrality over all other tomes, and he is by far the best character to wield it.

Generally, the player has two routes when utilizing Ced. The first is to focus more on his sister Fee, typically through physically-oriented fathers like Naoise, Lex, or Jamke. While these pairings tend not to benefit Ced's stats much, he will still appreciate having additional skills, and his base Magic of 15-16 with even the most physically-oriented fathers is sufficient to handle standard enemies when combined with Lightning and Pursuit. Another common option that will benefit both is Claud, who will boost their staff skills through Bragi blood (including letting Ced use the Valkyrie Staff) and also grant them much greater Magic and Resistance, though the pairing in question can be a bit tricky to get.

The second route is the more infamous of the two: pairing Erinys with Lewyn, which is one of the easiest pairings to obtain. Not only will this provide Ced with an utterly absurd 105% Speed growth and boost up all his most important stats, but it enables him to use Forseti. As Ced is already a very effective and consistent attacker, Forseti's 30 might and gigantic statboosts (including increasing his Speed far beyond the cap) will make Ced into the game's best combat unit by far for some time, able to take on powerful bosses like Arion, Meng, and Ishtar. The pairing also serves Fee rather well, as she appreciates both the skills and the added Speed. However, it does have a significant downside: Ced joins somewhat late, and he is never mounted. This places him in competition with Arthur, who, while not as offensively impressive, joins significantly earlier and can become a Mage Knight upon promotion. Because of this, it can be common to forego the pairing in the name of obtaining Forseti earlier, as the tome is more often than not overkill in Ced's hands.

If Erinys is paired with Lewyn, a bug (see Trivia section) can occur that makes Ced's base speed unusually low compared to Ced with other fathers. Fortunately, this is is rarely a major issue thanks to Forseti's +20 speed bonus and the fact that enemies generally have low Attack Speed.

In Chapter 8, Seliph can recruit Ced if he speaks to him.

In Chapter 8, if Lewyn is Ced's father, Ced may speak to Seliph, and he will gain three points of luck.

In Chapter 8, if Fee speaks to Ced, he will gain one point of luck.

In the Final Chapter, if Tine and Ced are lovers, she may speak to him, and he will gain three points of magic.

With great bases, unparalleled growths in Magic, Skill, and Speed, and the Forseti tome, which bestows a massive +20 Speed and Skill to the wielder, Ced is immediately one of the strongest members of your team upon joining.  Additionally, with an A rank in staves, he is a potent staff-user as well, able to wield staves like Rewarp and Berserk to great effect. He rounds off his kit with some of the game's highest growth rates, and though he won't level often, he can easily put them to good work. His only notable issue is his durability being somewhat average, though the Forseti tome's massive boosts to Avoid mean that it's not as big a problem as one might expect.

Hero on the Wind
Son of Silesse's pegasus knight Erinys. A hero that stood up for the liberation of Munster. Appears in Fire Emblem: Genealogy of the Holy War.

"In Silesse, which was for a long time under the control of the Empire, Ced, who returned to his country, succeeded to the throne, and devoted himself with all his strength to the reconstruction of the devastated country.
At his side,
His sweetheart, [Lover],
The Pegasus Knight Fee,
Smiled at him, filled with hope.
A beautiful land, and people who loved peace.
The Kingdom of Silesse, which Lewyn protected at the risk of his life, finally came here to completion."

Ced - Holy Warrior of the Wind (風の聖戦士 Kaze no Seisenshi)

"Upon returning to Silesse, Ced at last took the throne, as the people had longed for him to do. With his indomitable spirit and tireless work ethic, the war-torn Silesse slowly regained its former beauty."

Ced is illustrated in the trading card game with the following cards: 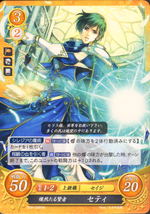 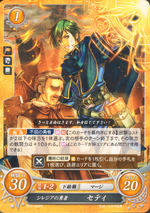 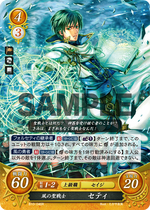 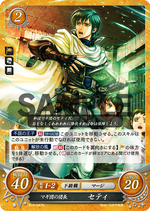 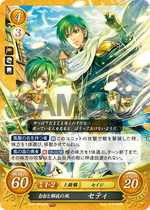 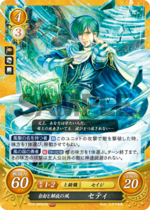 Ced is usually short for Cedric, which was originally a misspelling of the name Cerdic by Sir Walter Scott in the novel Ivanhoe. The name Cerdic is most commonly associated with Cerdic of Wessex, the first king of Wessex (which eventually became the Kingdom of England).

Possibly named after Cet mac Mágach, a warrior from the Ulster Cycle.

In-universe, he was named after his ancestor Ced, one of the Twelve Crusaders.