Pegasus Knight
[view]
“I love him even more now! Therefore I shall become a splendid princess so that Lord Gant appreciates me.”
—Celdia reaffirming her love for Gant

Celdia is a supporting character who originates from the Fire Emblem: Hasha no Tsurugi manga. The pegasus riding princess of the Lycian territory of Ragna, she is head over heels for the Tanian knight, Gant. The marquess of Ragna, Dovanon, is her father.

Celdia is first introduced leading the Ragnan army in a battle against the forces of Bern in an open field. Her army struggling to advance against Bern's forces, she is caught off guard and attacked by a soldier of Bern. Gant however arrives in time to save her before returning to his allies.

After the battle is concluded, and Bern has been successfully routed, Al, Tiena and Gant are invited to Castle Ragna where they are thanked by Lord Dovanon for their assistance in the prior battle. It is here they are properly introduced to Celdia, with Dovanon revealing that Celdia's mother was a Pegasus Knight of Ilia. He offers the group the chance to rest as well as offers Gant the chance to serve under Castle Ragna. While they accept the former, Gant refuses the latter, this frustrating Celdia and leading her to storm off, with Dovanon apologizing on her behalf and stating that he may have spoiled her too much due to her losing her mother at a young age.

The next day an old man informs Gant that "the princess" requested that she meet him outside of the castle, something that Gant misinterprets as being a request from Tiena. It was however Celdia who requested she join him for a picnic, though he once again refuses, this leading Celdia to question why he would follow Tiena's order. Gant responds saying that swore on his life to do so, leaving Celdia perplexed as Gant suggest they return to the castle. They are however ambushed by archers of Bern forcing Gant to shield Celdia with his body, and while heavily wounded, carry an unconscious Celdia back to the castle.

Upon their return, Gant is treated for his wounds while also learning that Tiena had been kidnapped by one of Bern's soldiers. He insists on going after her despite seemingly being on the verge of death moments ago, once again leading Celdia to question his devotion to Tiena. Gant recounts his past with Tiena, causing Celdia to run out the room. Celdia, having reflected on the way she had been acting, decides to help search for Tiena with her pegasus, and while she is able to find her, she is spotted by one of Bern's Wyvern Riders and is forced to fake crashing in order to trick him into believing she died. Al and Gant soon meet up with here where she reveals where Tiena is located and apologizes to Gant for how she acted.

Al and Gant are able to successfully rescue Tiena and the three soon depart from Ragna. Dovanon asks her if she had given up on Gant, though she affirms that she loves him even more and intends to become a princess that Gant will appreciate. She however says in her head that she will chase after Gant soon.

Celdia later shows up during the final battle outside of Bern Castle alongside other reinforcements from Lycia. After the battle outside the castle is over, she can be seen clinging to Gant as they make their way to storm Bern Castle.

After the war is over, Celdia returned to Ragna where she succeeded her father as Marchioness of Ragna. The selfish little girl that she was disappeared and she would often be found getting involved with the business of others. She also deepened Ragna's bonds with Ilia. She would also marry her beloved Gant and the two would have eight children together.

Celdia is initially introduced as being spoiled and overbearing, becoming irritated when she does not get her way or when her desires are not met. As stated by her father, this is likely due to him spoiling her after the death of her mother. Though she would improve after meeting Gant and learning of his reasons for serving Tiena so faithfully, she would still prove to be impulsive, deciding to help find Tiena alone after she was kidnapped. Nevertheless, despite her faults, she possess the capacity for growth and self reflection. Her father describes her as being tomboyish, something that he claims she inherited from her mother.

After the war, Celdia's selfish personality was said to have disappeared completely, with her becoming involved rather often in matters that do not concern her. On top of being a Pegasus Knight, Celdia worked to deepen the bonds with Ilia, the homeland of her mother, suggesting that she cherishes any connections that she may have with her.

While her skills in combat are not properly demonstrated, she is at least seen as capable enough to lead an army. She is also capable of quick thinking in combat, as shown when she made sure to fake her own defeat in order to throw off a Wyvern Rider that was pursuing her.

Celdia is illustrated in the trading card game Fire Emblem Cipher with the following cards: 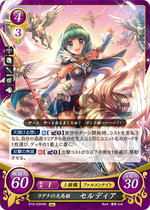 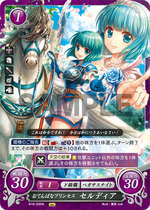 Celdia as a Falcon Knight by Fumi Hasumi.

Celdia as a Falcon Knight in Fire Emblem 0 (Cipher).

Celdia as a Pegasus Knight in Fire Emblem 0 (Cipher). 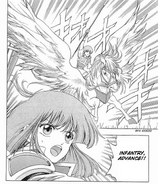