General
[view]
“...They are impressive, though, aren't they? My whiskers? Ha ha! I've not shaved since my very first battle. And have I ever lost? No! Not even once! Ergo, my moustache makes me invincible. It's science, my boy, science!”
—Cervantes

Cervantes (セルバンテス Serubantesu) is an enemy boss character from Fire Emblem Awakening. He is one of Walhart's officers and one of the few bosses in Awakening to be fought more than once.

One of Valm's most capable warriors, he has never been bested in combat. Believing that it was his beard that protected him in his first battle, he has never shaved it ever since, concerned that he would be vulnerable again if he did. Cervantes first appears in Chapter 16, where under Walhart's orders, is sent with a group of Valmese to intercept Chrom and the Shepherds at the Mila Tree after knowing that they were there to visit Tiki. Cervantes and his soldiers put up a good fight, but he is ultimately defeated and retreats.

Before the battle outside of Valm Castle, Excellus and Cervantes talk about the eventual "bloodbath" between Walhart's forces and Chrom's army. Though Excellus claims that he is unmatched by anyone due to his vast network of blackmailing, Cervantes merely scoffs off his comment when he cowers before Walhart. After Chrom's army repels Walhart back into Valm Castle, he is surprised to see that the Dynast formerly under the control of Yen'fay, and to a lesser extent Excellus, now helping the siege of Valm Castle. He once again scoffs of Excellus' notion that they are equal and leaves to prepare to defend his liege. Though he puts up a good fight against Chrom's forces, Cervantes is ultimately defeated and dies.

Because Cervantes often boasts about his beard, many other people often have difficulty understanding words that are similarly pronounced to beard. In the Japanese version the running gag was that he often uses the word 'hair' which could mean hair on the head or other body hairs (e.g. beard). Others would look at his (bald) head first while pointing out that he had none, and he would angrily correct them with a more specific word.

“My whiskers are safe against you lot—victory is inevitable!”
—Cervantes' pre-battle quote
“Nngah! But...how can this be? My invincible mustache! Blasted science, you have...played me for a...fool...”
—Cervantes' defeat quote
“So! They arrive at last, eh wot! "Yes, come closer," said the hairy spider to the flies...”
—Cervantes' reinforcement warning

Chrom: Fiend! You invade kingdoms and bully them into submission... Why? What does it achieve?
Cervantes: Do you even need ask, whelp? Emperor Walhart is destined to rule this world, plain and simple.
Chrom: Yes, but to what end?
Cervantes: Irrelevant! Walhart's mind is beyond the grasp of common men.
Chrom: So you don't even know what you're fighting for?
Cervantes: I tend to my own beard, boy. A soldier does not question orders. But he gives his loyalty—and maybe his life—in the service of greater men.
Chrom: Greater men? Is living only to conquer so great an ambition?
Cervantes: What could be greater! Once I had dreams myself of commanding a nation... But Walhart? Aye, he dreams bigger. He would rule the entire world! Mine is nothing compared to the moxie of the Conqueror. I am but a single tiny hair on the beard of a flea in his great mustache! Have you not tasted the thrill of being part of something bigger than yourself?
Chrom: Not at the price of inflicting cruelty and suffering, no.
Cervantes: Hmph. Then we have nothing more to discuss. Prepare to learn the meaning of the word "beard." ...Fear, I mean fear!

Cervantes: ...Eh wot?! It cannot be! Say'ri—my mortal enemy...
Say'ri: General Cervantes... Your reputation—and your gut—precedes you.
Cervantes: But we have met in battle before, girl! Have you forgotten?! Not long ago, you and I, locked in deadly combat. I was sure we had won the day until you appeared...
Say'ri: ...Your beard again? Can you talk of nothing else, you imperial pig?!
Cervantes: Ap-PEARED! I said "appeared"! Just...never mind!

“Let's have it then, rebellious scum! Like a flimsy belt around the waist of defeat, you shall buckle here!”
—Cervantes's pre-battle quote
“I...am finished... Nngh... But I have no regrets... I die in the shadow of...greatness...”
—Cervantes' death quote

Cervantes appears as an enemy Mirage in Tokyo Mirage Sessions ♯FE as a boss encounter in Tiki's third and final side story. After acquiring a small shard of Tiki's Dragonstone, he captures a number of Tiki Uta-loid producers, including Tiki=Waifu to drain their Performa. Itsuki and the others defeat him, rescue the producers, and recover the Dragonstone piece.

He may be named after Miguel de Cervantes, a Spanish novelist whose magnum opus, Don Quixote, is regarded as one of the greatest works of fiction ever written. 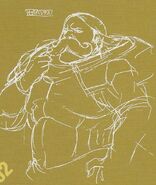 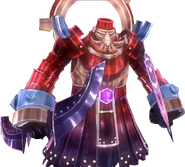