Griffin Puatu
[view]
“...Stealing's the only way I could live. I'm an orphan.”
—Chad in a support conversation with Hugh in The Binding Blade.

Chad is a playable character from Fire Emblem: The Binding Blade. Chad is an orphan from Araphen who takes revenge against the Bern forces for burning his orphanage down on the Lycian-Bern border. Chad joins Roy's forces in Chapter three of Binding Blade when Roy launches an attack on Castle Araphen.

He is friends with Lugh, Raigh, the Bishop Yoder and the other little orphans and cares about them. He fights to preserve peace among the countries and for his 'family' of orphans.

In a Support Conversation with Cath it is revealed that Chad is a rather good artist, and that the Father at the orphanage had always praised him for his artistic ability before he had died. The conversation also seems to imply that Chad has a desire to become an artist following the war.

Chad also describes much of his past to Hugh in their Support Conversation as well. In the conversation Chad borrows 3000g to buy a sword, later repaying 4000g and explaining why he borrowed the money to Hugh. Chad says that he bought the sword to use to fight for his 'family' of orphans.

Description: An orphan from the Lycian border to Bern.

Chad's Strength, Skill, and Speed growths stand out as some of the best of any unit in the game. Sadly, these do not make him a good combat unit, due to his poor base strength and durability, sword-lock, and lack of promotion.

Because of this, Chad is better off performing the usual Thief duties. He is your sole thief until Astolfo is recruited. While the latter is a better pick later on due to his better bases and durability, Chad can still be useful in maps which are made easier by having multiple thieves, such as Chapter 16. The player should be wary when positioning him as he can be easily killed by most enemies, especially on Hard Mode.

Lycian Wildcat
Grew up in an orphanage in Lycia with a pair of brothers, Lugh and Raigh. Seeks revenge on Bern for killing the caretaker of the orphanage. Appears in Fire Emblem: The Binding Blade.

Chad - Lycian Wildcat (リキアの山猫 Rikia no yamaneko)
"Chad gave up thievery after the war. He traveled across the continent and dedicated his life to helping orphaned children. Not many would guess from his actions that he was once a cunning thief."

Chad also appears in chapter 3 of the Hasha no Tsurugi manga where he plays a major role in the story of the chapter. He is out trying to hunt down the group of soldiers that destroyed the orphanage he worked at. At the end of the chapter, he leaves Al and his group to find another group with more powerful companions to help him get his revenge. He shows up again in chapter 17 and 18.

Chad is illustrated in the trading card game Fire Emblem Cipher with the following cards: 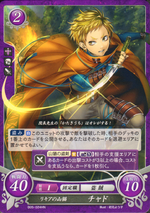