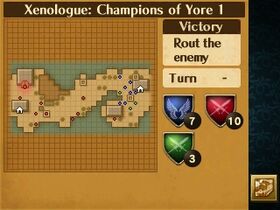 Chapter script
[view]
“Chrom ends up lost in the Outrealms, where he chances upon an ageing fortune-teller who can use summoning cards to call forth the Einherjar. When a battle breaks out, the fortune-teller aids Chrom by summoning who...?”
—Opening Narration

Champions of Yore 1 (英霊の魔符 1 Eirei no Mafu 1 lit. Magic Charm of Heroic Spirits 1 in the Japanese version) is Xenologue 1 of Fire Emblem Awakening and the first of a 3 part series of episodes introducing players to the concept of the Outrealm.

Champions of Yore 1 is the first map available. The battle map, as well as all of the Champions of Yore Xenologues, is modelled after Chapter 1 of Fire Emblem: Shadow Dragon and the Blade of Light, which took place in Talys. This Xenologue also uses the same map and battle tune from that map. Chrom will team up with 10 Fire Emblem male lords and important characters, led by Marth, to defeat an army of 10 Fire Emblem female Lords and important characters, led by Celica. After completing this Xenologue, Old Hubba will award the army with a Hero King Marth Einherjar card. If recruited, Marth will join as a Level 8 Lodestar.

Chrom and his army are called out to a mystical realm known as the Outrealm where Chrom finds himself in the middle of a battlefield on the isle of Talys. There, he meets an old fortune teller, the keeper of the Outrealm, who requests for Chrom to defeat Einherjar cards who have manifested into heroes from ancient times. To aid Chrom, the fortune-teller uses the ancient Einherjar arts passed down by his family to summon Marth, as well as Alm and Ike. Chrom is then joined by Marth, Alm, and Ike as NPC units, with the objective of defeating the 10 main heroines from previous titles.

After the battle is over, the old fortune-teller explains that he has lost control of a number of Einherjar cards and they are causing chaos in the Outrealm. He warns Chrom that these cards could gain enough power to level an entire country, and requests that Chrom continue sealing the Einherjar by defeating them in battle. After Chrom grudgingly accepts, the fortune-teller mentions how time passes differently in the Outrealm and tells Chrom that he is welcome to visit again any time during his adventures.

A special conversation will trigger if the these playable units battle these Champion units. Bolded names are NPCs and can be spoken to with Talk.

Of all maps in DLC, this is the easiest map and is a suitable training ground for anyone after completing Chapter 4. Most units should have no trouble at all on this map, and the later you do this map, this map can be completed without having to move ANY of your units. For Lissa and Maribelle this map is great to help them level up since the NPC allies will surely take a beating from time to time, so this map is good for Cleric EXP and Staff Weapon EXP grinding. Take some time to visit the villages as this map also makes a good item grinding map with two villages and two event tiles, give you a possible total of 4 items. You can also choose to have the above units battle with the respective women with them. These will trigger a short special conversation. Though this is not necessary to complete the map, a few of them poke fun at the characters or give brief glimpses between the characters.

The map music that plays here is "Battle Map 1 - Player Side Attack" from Fire Emblem: Shadow Dragon and the Blade of Light's soundtrack.