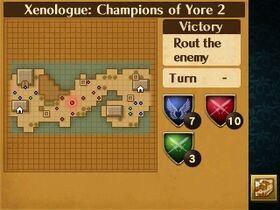 Chapter script
[view]
“Chrom visits the Outrealm again, this time chasing a mysterious female who's stolen magical talismans from the old fortune-teller. The mysterious female uses the talismans to summon forth ancient heroes and thus Chrom is forced into another battle...”
—Opening Narration

Champions of Yore 2 (Spirit Talisman 2 in the Japanese version) is Xenologue 2 of Fire Emblem Awakening and the second of a 3 part series of episodes introducing players to the concept of the Outrealm. This chapter takes place in the Outrealm: Talys.

In a reversal of fortunes, Chrom is joined by Eirika, Lyn, and Celica as NPC units and must defeat all 10 male heroes from previous titles. The battle map is modelled after Chapter 1: Marth Embarks of Fire Emblem: Shadow Dragon. After completion of the mission, Roy will join as a Level 11 Mercenary.

A special conversation will trigger if the these playable units battle these Champion units. Bolded names are NPCs and can be spoken to with Talk.

“Once again, Chrom and his companions visit the Outrealm, this time chasing after a mystery woman who has stolen Old Hubba's cards. She uses the cards to summon ancient heroes, forcing Chrom into battle once again.”
—Website Opening Narration
“Who is responsible for the coming of the Einherjar?”
—North American eshop Opening Narration

Ephraim and Sigurd will always attack the strongest units in their attack range.

The map music that plays here is "Beyond the Distant Skies" from Fire Emblem: The Binding Blade's soundtrack.