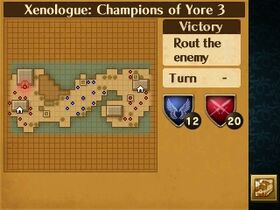 Chapter script
[view]
“The old fortune-teller blunders and somehow lets his magical talismans fall into enemy hands. Twenty heroes have been summoned from ten worlds. If Chrom can win this battle, maybe he can obtain the Outrealm's ultimate treasure...?”
—Opening Narration

Champions of Yore 3 (Spirit Talisman 3 in the Japanese version) is Xenologue 3 of Fire Emblem Awakening and the third of a 3 part series of episodes introducing players to the concept of the Outrealm. This chapter takes place in the Outrealm: Talys.

After triumphing against the heroes and heroines from previous titles, Chrom must face all 20 heroes and heroines again, this time simultaneously. The battle map is modelled after Chapter 1: Marth Embarks of Fire Emblem: Shadow Dragon. After completion of the mission, Micaiah will join as a Level 12 Dark Mage with Aversa's exclusive Skill Shadowgift and an All Stats +2 Manual.

A special conversation will trigger if the these playable units battle these Champion units.

The map music that plays here is a briefened version of "Echoes of Daybreak" from Fire Emblem: Radiant Dawn's soundtrack.