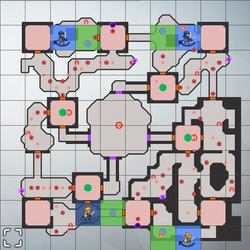 Chapter script
[view]
“The Chaos Dragon thrusts the entire region into another dimension. The party must rely on the strength of their bonds to fight the dragon in a world riddled with Outrealm Portals.”
—Opening Narration

Chaos Dragon Velezark is the 21st and Final Chapter (a.k.a. Endgame) of Fire Emblem Warriors. This chapter takes place in the Interspace.

Velezark turns the whole region into a space time dimension. The heroes battle his forces, weaken him, and slay him. They are brought back to the World Tree, where they say farewell. Rowan and Lianna go back to the castle and are crowned the rulers of Aytolis.

Along with your main lord, bring in the Falchion wielding units, Marth, Chrom and Lucina. They can easily take out the Fafnirs protecting the Dark Crystals. After you have weakened Velezark, take out the Shadow controlling the Outrealm Fort, and activate the Dragon Vein which will allow you to pass through and battle Velezark. It's recommended that you use Marth to battle Velezark, since he is a fast attacking unit. It's also highly recommended that you use Pair Up, since the support unit can take out enemies and defend you from attacks.