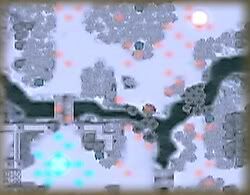 Chapter script
[view]
“Ashera, the Goddess of Order, has awakened. Her righteous fury has turned nearly all of the warring soldiers to stone. Yune, the Goddess of Chaos, has also awakened. Freed from Lehran's Medallion, she counsels Ike and his companions to split into three groups and make for the Tower of Guidance. Micaiah is joined by her constant companion, Sothe. General Skrimir also accompanies her, along with Naesala and Princess Leanne. Apostle Sanaki rounds out the group, travelling with her chief bodyguard, Sigrun, and others. Micaiah's company decides on a southern route and sets out for Begnion. Save for the sounds of the local wildlife, their path is eerily silent and empty. It's as though they have stepped into a vast and desolate monument to the war.”
—Opening Narration

Chaos Named is the prologue of Part 4 of Fire Emblem: Radiant Dawn. The player takes charge of Micaiah's Silver Army (consisting of whomever the player has chosen earlier) in this chapter. Also, Sothe will promote into a Whisper at the end of the chapter.