Chapter 9: For Whose Sake

Priest
[view]
“Father! What're you saying!? You're the only one I've ever wanted to be with. And now I can work to help bring about peace. That makes me so happy.”
—Charlot

Charlot is a playable character from Fire Emblem: Genealogy of the Holy War. He is the brother of Laylea.

He is the substitute character of Coirpre if Sylvia was not paired up. Unlike Coirpre, Charlot is able to receive the Berserk.

Charlot is a very poor unit, with little to recommend about him. By the time he joins the army, the player has a large swathe of units capable of wielding staves, several of whom may even be promoted. He will die in two hits to most enemies, he cannot fight at all before promotion, it will take a full 19 levels for him to reach that point, and due to his lack of offensive skills, low weapon ranks, generally poor growths besides Magic, and High Priest class, he will never be a particularly strong combat unit. Charlot's Paragon skill makes him fairly quick to level, especially if he spams Physic, but in terms of being a pure healer, Coirpre tends to be the better pick due to being able to use Fortify at base. In ranked runs, Charlot tends to be the better pick, as it is more important for him to gain levels at all than for him to put those levels to work, though this comes at the cost of swapping Lene for Laylea, losing Lene's inheritance.

One of Charlot's few truly unique aspects is that he is the only way for the player to obtain a Berserk staff. This tends to see use in two contexts: first, as a way to deal with Arion, and second, in certain exploits involving enemies with Hel tomes. Sleep or Silence tend to be better most of the time, but it is still an option only Charlot can provide.

In Chapter 9, Charlot can recruit Hannibal if he speaks to him.

In Chapter 9, after Grutia is captured, Charlot may wait next to Hannibal to obtain the Berserk.

In Chapter 9, either Patty or Daisy may speak to Charlot, whereupon he will gain three points of HP and 100 love points with the conversation initiator. This conversation may not be triggered if either one of them already has a lover.

In Chapter 9, Laylea may speak to Charlot, resulting in him gaining one point of luck.

In Chapter 10, after Miletos is captured, Charlot may speak to Altena, whereupon she will gain five points of magic defense.

“...Father!”
—Chatlot's death quote in Genealogy of the Holy War

Charlot is illustrated in the trading card game with the following cards: 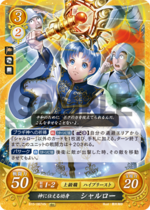 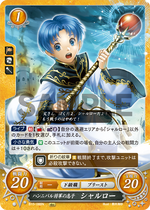