Charlotte (シャーロッテ Shārotte) is a playable character in Fire Emblem Fates and an ally in the Conquest and Revelation routes.

Charlotte was born in the capital of Nohr, Windmire, and grew up a pauper. Her childhood was more difficult than some due to her parents both being very poor, but they looked after her to the best of their ability. As thanks, she sends some of her earnings as a Nohr border guard back home to them. She is Benny's partner.

Previously, Charlotte was a member of the Royal Guard, however, because she intentionally acted like a fragile lady in order to attract a handsome nobleman, she was deemed too "fragile" to serve in the Royal Guard by her superior. Demoted to a border guard, she wishes to return to the Royal Guard due to the higher pay and greater chances of meeting noblemen. However, she fears that if she acts in her normal brutish self, no man will be attracted to her. She is the strongest fighter in the army. Her birthday is May 4.

Charlotte appears briefly in Chapter 14 as the Avatar and the Hoshidan army launches an assault at the Border Walls where she and Benny are defending. The border guards are defeated and Charlotte's fate is unknown.

During the Avatar's attempt to quell the rebellion at Cheve in Chapter 13, Charlotte hears the ruckus happening outside the Border Walls and comes out with Benny to see the reason. They eventually discover the Avatar and their army in the middle of a battle. Although she initially throws a fit, after hearing of the Avatar's royalty status, she quickly butters up to them and offers to fight alongside them with Benny in tow. With the prospect of a better opportunity for pay, Charlotte joins the Avatar's cause.

After hearing the Avatar stopping Xander and Ryoma from clashing at the Destroyed Town, King Garon sends Charlotte and Benny alongside Silas to Port Dia to stop the Avatar. Sick of her job and the low pay for her task, Charlotte encounters Elise who had just joined the Avatar's army. Though initially mean to her, she quickly defects to the Avatar's army when she realizes that she is speaking to a royal and is eager of the higher pay of the royal guard.

Charlotte is normally perceived as a cordial, authentic girl by most men who interact with her, though she can be quite flirtatious and forward during her courting attempts. However, behind their backs, she is brutish, rough, and potent. She is a ferocious fighter and loves throwing herself into battle without a thought of danger, but tries her best to keep these impulses in check around men. She interacts with her "kind" personality when speaking with men as she has received negative reactions when she showed her true personality to them, which badly affected her self-esteem and led her to believe that she would never be really loved. Her facade does not work all the time however; Xander is able to see through it and Kaze is seemingly unaffected by it. Charlotte is particularly skilled in barehanded combat, as Xander notes her skill when she takes down a Faceless without any weapons and was able to fell a tree with a single punch in her support with the Avatar. Charlotte also dislikes flattery.

Charlotte's secondary class is the Troubadour. This class and its promotions are mainly to help Charlotte gain some much-needed Resistance, as that is the main stat strength of this class. Unfortunately, given that Charlotte's stats suit a more physically oriented class, she is not nearly as good as a healer as Elise or even Felicia and Flora. Skill-wise, Troubadour gives her Resistance +2, which is good as she needs as much Resistance as she can get, though this can be replaced later. Demoiselle is another supporting skill to help out male units near her by reducing damage dealt to them by 2. If she becomes a Strategist, Charlotte continues to struggle, as her low magic makes her ill-suited for offensive play. The skills tied to this class are also a bit ill-suited for an offensive Charlotte as Rally Resistance is good to help others, but the skill itself does not apply to her when she uses it. The same goes for Inspiration, which boosts damage dealt by allies by 2 and reducing damage taken by 2. If she becomes a Maid, however, she will be the physically strongest Maid out of all playable potential Maids. However, again, she is nowhere near as potent in her healing as her other competitors. The Maid's secondary skill is the only one useful for her base class, as Tomebreaker allows her to avoid a bit of stress from engaging her biggest threat, magic units, as it raises her Hit and Evasion against them. 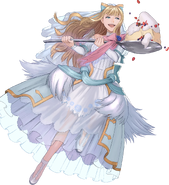 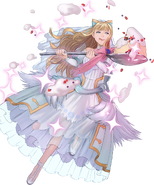 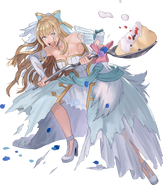 Artwork of Charlotte as a Fighter for Fire Emblem 0 (Cipher) by Daisuke Izuka. 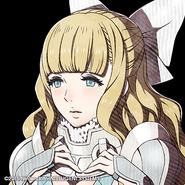