General in the Liberation Army

Mortal Savant
[view]
Charon is a character from Fire Emblem: Three Houses. He was one of the Ten Elites who fought in the War of Heroes, and the original bearer of the Crest of Charon.

During the War of Heroes, Charon was one of the Ten Elites who fought alongside Nemesis against the forces of Seiros, the Four Saints, and the Adrestian Empire. Charon bore the Crest of Charon, a blessing from the Goddess, and wielded the legendary weapon Thunderbrand. After the war, Charon founded House Charon in the northern region of Faerghus.

After Seiros prevailed over Nemesis and the Adrestian Empire completed its conquest of Fódlan, she pursued and killed Charon and took custody of Thunderbrand. Subsequently, the Church of Seiros revised history to write Charon and the Elites as heroes who helped create the new society alongside Nemesis, but became corrupt and had to be struck down by Seiros. Charon's descendants became nobility of the Empire and later, the Holy Kingdom of Faerghus, passing down his Crest through the centuries.

Charon is an underworld deity in Greek mythology. He is the ferryman of Hades, who carries the souls of the dead on the waters of the river Styx and Acheron. 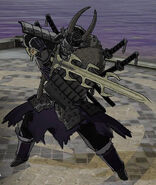