∞
[view]
“Better on the table than the battlefield.”
—In-game description from Fates.

The Chopstick (菜箸 Saibashi) is a Shuriken that is introduced in Fire Emblem Fates. A joke Shuriken that literally assumes the form of a pair of chopsticks bound together by a small length of string, the Chopstick is clearly not viable for combat purposes, although it does increase its wielder's Speed by 2 and boosts their ability to evade hostile attacks. 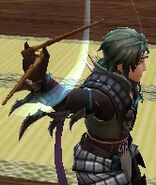