Chris (クリス Kurisu) is a playable character from TearRing Saga: Berwick Saga. Chris is a knight of Sinon and Ward's daughter. She is kindhearted and skilled with crossbows.

Chris is hard to gauge. Her strength is not that high, but she does not need it due to mainly using crossbows. Her skills help very little in combat, but their utility value is immense. Finally, Chris' promotion is just bad stat-wise, but it does provide her with the ability to use swords and is not that hard to get, as she will surely reach 20 bow/crossbow skill by level 15. Overall, Chris is a character that depends on player preference - use her only if you like crossbows.

Chris's portrait as an Arrow Knight 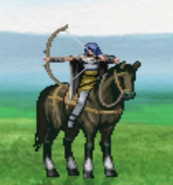